YEAR OF THE COBRA ~ BURN YOUR DEAD ... review

Year of the Cobra, Amy Tung (bass, vocals.keys) and Jon Barrysmith (drums), seemed to be everywhere all at once after the release of their debut album "...In The Shadows Below", the duo garnering favourable mentions and praise in both the mainstreams music magazines and the web's underground press. This level of appreciation was achieved not by being in the right place at the right time but by a combination of sheer hard work, hauling their asses around the club circuits getting a reputation as a must see live act,  and having a sound and groove that appealed to both those lovers of the gnarly riff and those that appreciate a good melody alike. Amy and Jon return this year with another offering of riffs and melody with their latest release "Burn Your Dead"  (Magnetic Eye Records). 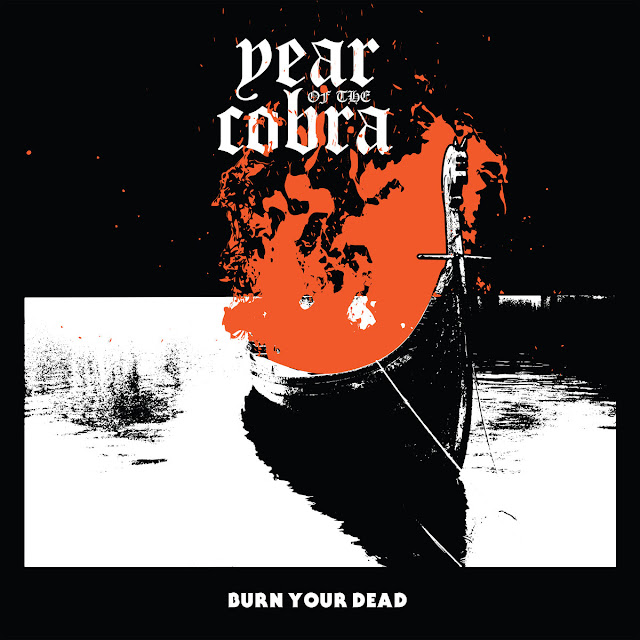 First offering "Cold" starts with Tung laying down a low, slow heavily distorted bass line accompanied by Barrysmith's percussion, the drummer keeping things economic but solid, laying out when Tung enters with her vocals. on the verses, supporting her with a heavier touch on the chorus. Tung's vocals are sublime, her slightly sweet, slightly ethereal tones although not having the bluesy power of say Holy Grove's Andrea Vidal nonetheless have a strength and clarity perfectly suited to the grooves set around them. "The Descent" follows, Tung introducing the song with a warm clean jazzy bass motif before Barrysmith's drums crash in and the song takes off into mid-tempo soulful territory with Tung singing of  "putting one foot in front of the other"  and telling us "don't look back" over a backdrop of sensual undulating groove. "Burn Your Dead" explodes from the speakers with Tung and Barrysmith hitting a strident stoner/punk rock groove that recalls the early days of Fu Manchu and Nebula and briefly visits doomier climes mid-song before once again hitting the safety pin and ripped t-shirts trail to take things to a close. "The Howl" finds YOT bringing things back down nearer to earth with a tune that has an edgy space feel thanks, in part, to its phased  bass lines and keyboard effects. Tung tailors her voice perfectly to match the songs groove as she croons, whispers and sings her lyrics but it is the duo's musical interaction that really catches the ear here, Barrysmith's drumming on this track is a masterclass in restraint and release, the drummer knowing when to lay out and when to let loose, his percussive might perfectly matched by Tung's intricate, and at times breathtaking, bass playing. "And They Sang.." closes proceedings and sees YOT continuing the phasey attack of the previous track but this time at higher tempo. Tung's vocals taking on an aggressive almost sneering tone that perfectly compliments the songs 100mph drum and bass onslaught. 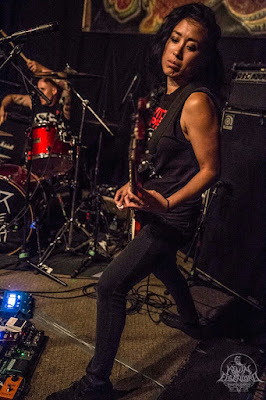