Florida may be feeling a little battled and bruised since Hurricane Irma blustered and blew her way across its coastlines, towns and cities but the people there are a resilient bunch and hopefully it wont be too long before they are back on their feet rebuilding, repairing and slowly putting their lives back together What effect these recent events have had on Florida's local music scenes is as yet unknown but if the posters announcing an "After Hurricane Party" on Tampa juggernauts Beerwolf's Facebook page are anything to go by then things are soon gonna be back on track!
Beerwolf, Jason Kleim (vocals and bass guitar), Matthew Howland (lead guitar) and AJ Prasad (drums), have been a bit quiet on the recording front since the release of their debut album "Oracle's Prophecy" in 2015 but the Tampa, Florida  band have returned this year with new ideas, a new focus and in "Planetfall" a brand new album. 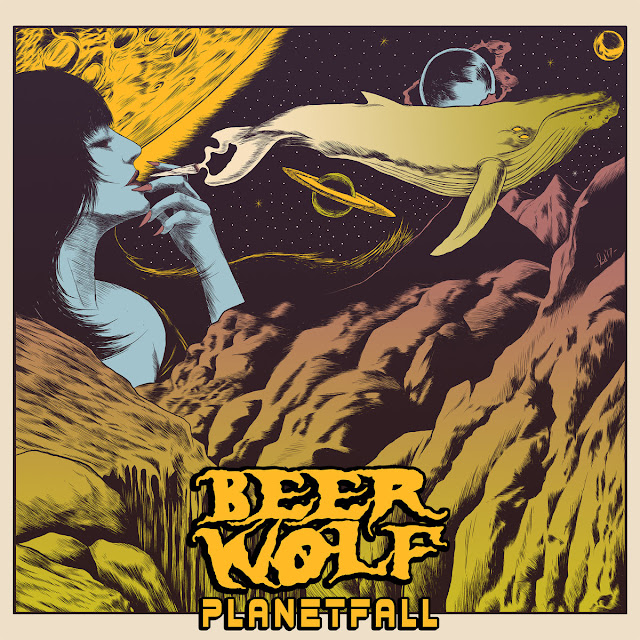 Title track "Planetfall" opens Beerwolf's new opus, a throbbing doom-laden instrumental crammed with dark swathes of heavily phased riffage and pulsating rhythms, then goes full circle to finish with "Epilogue" another instrumental this time marked by it's swirling spacey effects and slightly heavier Hawkwind vibe. In-between these two tomes of instrumental diversity, however, are found the real meat and potato's of Beerwolf's groove and sound with songs like "Eagle Shirt", "Crom's Steel" and "Bones of Titan" showing a definite leaning towards the old school aesthetics of 70's hard/classic rock sprinkled with an even pinch of gnarly stoner/desert fuzz all coated in strong clean vocals. Beerwolf do dip their toes into the instrumental pool again with "Haze Arcane" and "Serpentine Fiend", both excellent jams replete with swirling guitar solo's screaming over grizzled bass lines and solid punchy percussion but it is when the band turn to delivering actual songs they really come into their own. 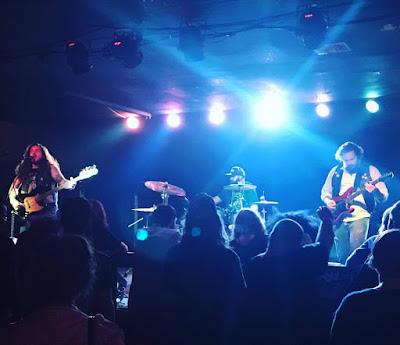 "Planetfall" is a superb album that's sure to be a serious contender for many of those end of year lists so beloved by fans and critics alike and one that's gonna be spinning on a regular basis here in the Desert Psychlist bunker.
Check it out ....