The late 60's early 70's was a time of change musically, a time when the youth of the day were discovering new found freedoms both culturally and sexually with those freedoms reflected in the music they chose to both listen to and play. These early experimentations with sound, accelerated by the newer technology of big powerful amplifiers and signal altering effect pedals, has to a large extent coloured everything we listen to today especially within the undergrounds burgeoning doom,stoner and psych scenes where "retro" is not seen as a dirty word but as a badge of honour.
Quebec's Mojo Wizard have no bones about declaring their allegiances to the past the Canadian four piece describing their sound as "heavy and intoxicating rock that brings back to life the era of jean coats and rolled cigarettes", whether that description exactly nails what Mojo Wizard brings to the table you will have to decide for yourself by giving the bands new album "The Mystic Peephole" a listen. 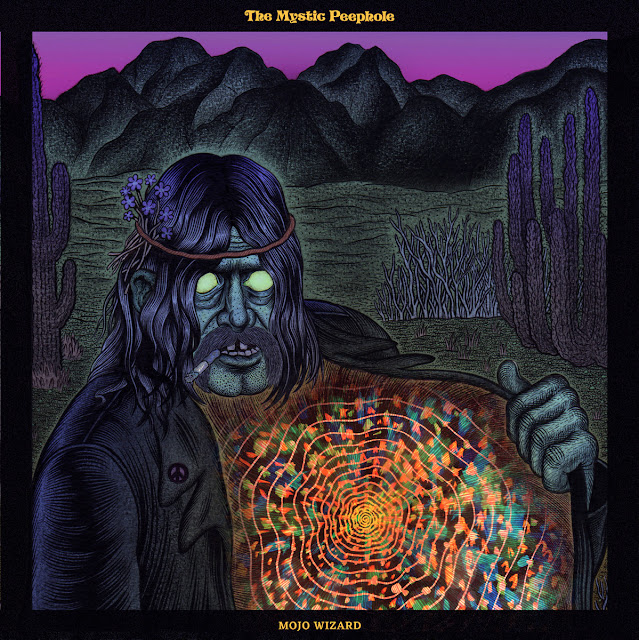 Mojo Wizard, Rico Desjardins (vocals & keys), Guillaume Couture (bass). Maxime Lussier (percussion) and Karim M'sallem (guitar), have with "The Mystic Peephole" created an album that takes all those good vibrations from the past and merges them with all that is currently rocking the boat of the rock's underground scene today, blending the resulting mix in such a way as to retain a certain level of "old school" familiarity yet at the same time a feeling of  modern freshness and innovation. Bluesy psychedelic grooves served up with a large helping of stoner/desert fuzz was the name of the game with Mojo Wizard's first release "EP", the four Canadians jamming a sound informed by swirling guitar solo's, crunching riffage and tight rhythmic patterns but with "The Mystic Peephole" the band have shifted their focus towards a more expansive sound, bringing in keyboards to not only fill out their sound but to also add an element of lysergic spaciousness to their grooves. Songs like " Euphoria", with it's trippy intro segueing into a grizzled stonerized blues groove and "Pheromone Mist", with it's early psych vibe, head spinning lyrics and scorching guitar screaming finale, are fleshed out by swathes of cleverly placed keyboard texturing that lift the songs, already impressive grooves, from being good to bordering on being outstanding. Mojo Wizard show they can also get down and dirty too as on the spacey doom-lite opener "Move" and the fuzz drenched rocker "Are You Satisfied", the band proving not only can they take off on acid hued flights of fancy but they can rock out with the best of them also.  Factor into these musical equations Desjardins clean, distinctive vocal tones, Couture's gnawing,growling bass lines, Lussier's mix of rock solid tight and jazzy laid back percussion, M'sallem's swirling lysergic solo's and fuzz drenched riffs and you arrive at a sound that although rooted in the psychedelic blues and hard rock of the past has more than a firm grip on the grooves of the present and maybe even those of the future.
Check 'em out ....