The Free Dictionary defines the word "sound bite" as "a short audio or video clip taken from a speech or press conference and broadcast", this definition can be extended to movie clips, and even snippets of music and is a trick long been used by artists and bands in the underground rock scene to furnish their songs with an added level of interest and impact. Australian prog-doom instrumentalists Reptilian Illuminati have taken this little trick a step further with their album "Dark/Light", the quintet from Melbourne, Matthew Brennan (guitar), Terry Pietrosanto  (guitar), Dean Astrella (guitar), Dexter Karpe (bass), and Matty Innes (drums), have taken those sound bites and weaved them into and around their dark grooves of progressive doom not only to furnish those grooves but also to document their story. 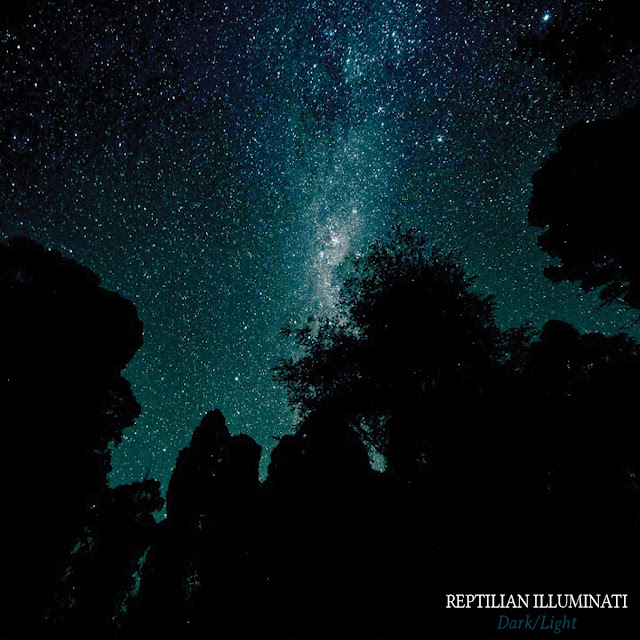 "Dark/Light" is a conceptual album exploring the phenomenon of UFO's and the mystery that surrounds them by integrating into swirling, sometimes brutal, sometimes gentle and ambient, grooves of complex and intricate progressive doom metal snippets lifted from documentaries, news reports and interviews, using them not, as is often the case, as an introduction to a song but as part of that song. Each song on "Dark/Light" refers to an incident, sighting involving a UFO encounter, songs with titles like "Roswell N.M. 1947", "Rendlesham Forest" and "Ruwa, Zimbabwe" are, along with swathes of crunching riffage, subtle arpeggios, searing solo's and a diverse array of bass and drum groove, filled with eye witness accounts and reports concerning those incidents weaved cleverly into the heart of those songs. Instrumental music can often alienate listeners used to having a screaming front man at the helm but Reptilian Illuminati's use of these samples/snippets/bites within the structures of their tunes, instead of at the start or finish, manages to alleviate that need for a vocalist and makes for a more complete and satisfying instrumental experience.
Check it out .....