When Desert Psychlist reviewed Desert Colossus' self titled debut "Desert Colossus" back in January 2016 the words punky, hard rock and fuzz were mentioned as well as comparisons to Kyuss, Fu Manchu and The Truckfighters, so with the release of a brand new album "Omnibeul" we have to ask the question do those mentions and comparisons still hold water today?
Thankfully, and with the addition of  a little more muscular oomph and musical focus, the answer is a resounding yes! Raucous grooves of chainsaw fuzz and insistent rhythmic might are the order of the day as Dutch groovsters Desert Colossus take you on a musical road trip through their world with nine of the most fuzzilicious grooves your likely to hear coming from our side of the big pond this year. 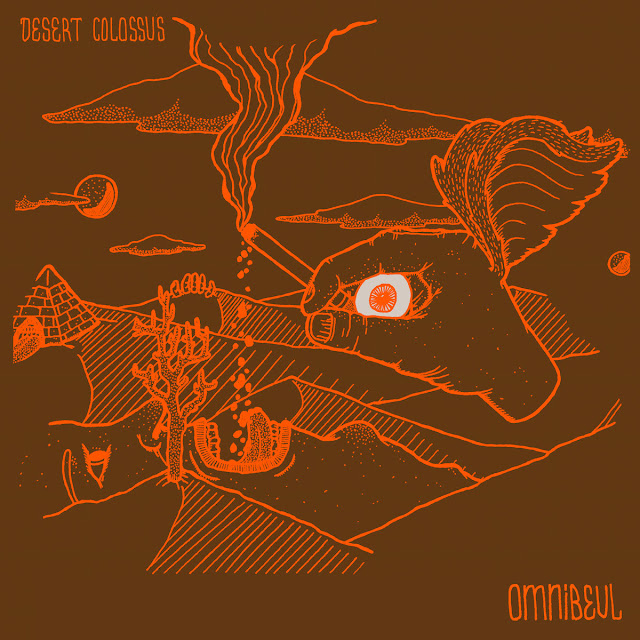 "Omnibeul" kicks off with "White Rabbit", a frenetically paced rocker packed with crunching riffage and strident rhythms overlaid with manic wide eyed vocals, that hurtles along like a runaway train and in doing so tells you, in just 2 minutes and 28 seconds of scintillating stoner/desert groove, everything you need to know about what Desert Colossus do . Desert Psychlist could  leave it just there and just allow the music to do the talking but "Omibuel" is an album that inspires words and deserves to be talked and written about, such is the sheer joie de vivre and sense of fun Desert Colossus bring to the table with their punchy punky.fuzz drenched grooves. Whether borrowing Nirvana-esque licks and vocal inflections, as on "Hustle", or  mixing up their deliciously dusty desert refrains with touches of doomy low and slow atmospherics, ala the superb "Sleeping With Stones", or even when they are getting a little sludgey and alternative. as on the totally schizophrenic "Give Gas Chopperbike", there is a sense that they are doing so with a glint in their eyes and an ever so slightly sardonic smile on their lips. 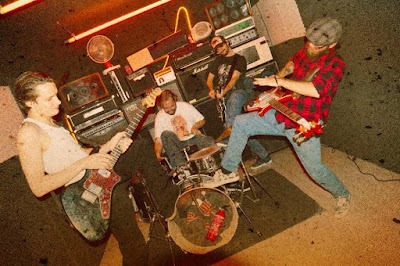 Desert Colossus, Frank Zoomer (vocals/guitar), Frank Fey (drums), Tom Collé (bass) and Leon van Wijk (guitar), should be roundly applauded, not only for creating, with "Omnibuel", an album that pushes all the right buttons both musically and dynamically but also one that leaves the listener wearing a big cheesy satisfied grin on their faces and nodding their heads knowingly.
Check it out ...