CAPTIVES OF THE VOID ~ HYPNOS .... review

"Fuzzed out riffs. spaced out jams" is how Bradford. UK's Captives of the Void describe their music and to be honest those six words probably sum up their grooves better than Desert Psychlist could do with a hundred but we are gonna give it a go anyway.
Captives of the Void first came onto the radar of the underground's fans and  intraweb press via their self titled debut release "Captives of the Void" a stunning collection of fuzzed out instrumental jams that prompted Fuzz FM to proclaim it as "Some of the best instrumental psych ever conceived", high praise indeed for a debut release and praise well deserved. Now the band, a duo consisting of Jack Larkin and Max Storr, are back fresh from the studio and ready to rock our world with a whole new set of jams flying under the banner of "Hypnos". 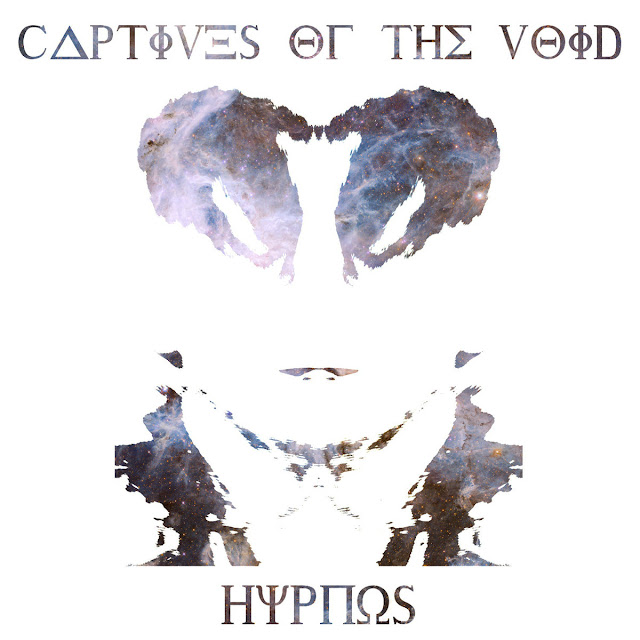 Fans of Floydian soundscapes, Earthless type wig outs and Ozric Tentacles like cosmic travelling will all find something to hang their hats on over the course of the eight jams to be found on "Hypnos", jams replete with scorching guitar pyrotechnics, crunching riffage and punchy, pummelling percussion that come at you from a myriad of different directions to entice and delight in equal measure. Whether laying down moody doom edged psych ("It's Not Safe"), eastern tinted lysergic stoner ("The Search") or spacey Ozric tinged fusion ("Joined In Orbit, ft. Tilly Riddle) there is no denying that these guys have a firm grasp of what makes instrumental music work, not only for themselves but also for  the listener. Instrumental music can often lend itself to overindulgence and self importance causing the listeners mind to wander while the guitarist goes off on yet another endless solo this is not the case with Captives of the Void the two musicians allowing each other the space and time to develop ideas and themes within a song and then filling those songs with little twists and turns that peak the interest and keep you guessing where the music may take you to next, taking their listeners with them on heady cosmic trips they will not want to miss a second of.
Check 'em out ...