When a band cite among their main musical influences such luminaries as Black Sabbath, Motorhead, St.Vitus and Corrosion of Conformity you get a fairly good idea of what to expect from them when they finally release a product. Philidelphian trio Hellrad deliver on all those expectations with their debut release, a raucous riff fuelled romp they describe as "ugly sludge metal", flying under the title "Counting Sins". 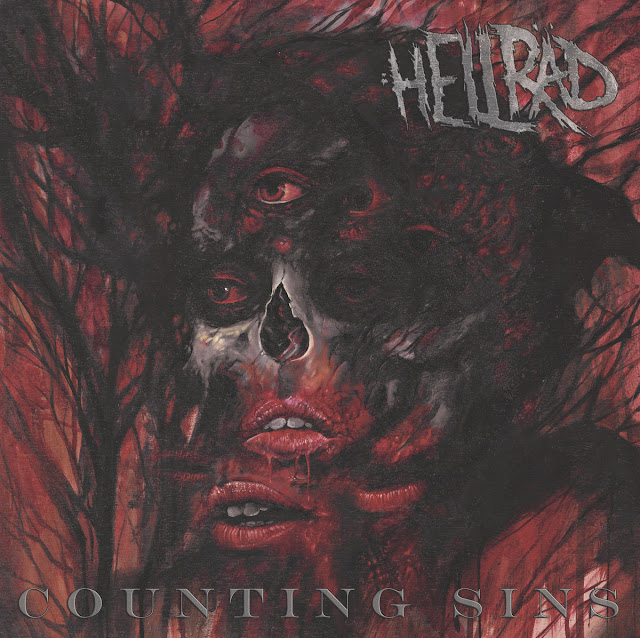 Hellrad make no apologies for what they do, the trio of Mike Hook (guitar), Herb Jowett (bass, vocals) and Benjamin Harris (drums), intend to give no quarter in their attempts to slay all before them with their raucous riffage, pulverising grooves and big throaty vocal tones. First track "The Night" opens innocently enough with a brief droning effect then Lepor's drums kick in and all hell breaks loose, the drummer quickly joined by Hook's guitar and Jowlett's bass, the band erupting into a face melting stoner/sludge groove fragmented with lysergic atmospherics over which Jowett also delivers grizzled vocal tones. Following track "No Getting Out" follows a similar path but with  slightly doomier undertones it's menacing moodiness heightened by Jowett dropping his vocals down into a sinister half spoken, half sang growl and is further enhanced by Hook's clever use of guitar dynamics and Harris' astonishingly powerful drum skills. "Staring At The Walls" is up next and is akin to being hit by a truck such is the force of its ferocity and intensity, both Jowett's voice and bass growling in, over and  around Hook's crunching guitar riffs and Lepor's pummelling rhythms . Final track "Counting Sins" closes the album with a pulsating stoner/sludge groove that finds Jowlett roaring about "finding the truth" and announcing "this is your fate" against a backdrop coloured by growling bass riffage and punishing percussion finished with searing shards of dark guitar colouring, Hellrad finally closing proceedings the way they started them in a wave of droning noise.. 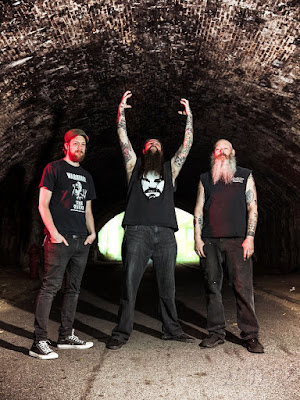 Sludge metal has a tendency towards unrelenting brutality but the four songs that make up "Counting Sins"are balanced with elements of atmospheric light and shade saving what, on paper, looked to be just another riff fest into something quite dynamic and highly enjoyable
Check it out ....