Doom comes at the listener from an increasing array of  musical directions these days, brutal and intense, progressive and complex. psychedelic and swirly variations have all found a niche to call their own beneath the huge shadow cast from the genres dark umbrella. With so many styles of doom to choose from it is however those slightly bluesy, slightly heavier grooves that Black Sabbath brought to the table back in the early 70's that seem to still resonate with listeners the most. Sabbath in looking for a darker, heavier sound, and as the result of an unfortunate incident whereby their guitarist lost the top of his finger, started experimenting with lighter strings and lower tunings and in doing so almost by accident created a sound that many believe birthed what we now call heavy metal and in turn the heavier, lower sound of doom. Greece's Acid Mammoth, Chris Babalis (vocals, guitars), Dimosthenis Varikos (bass), Christos... Babalis (guitars) and Marios Louvaris (drums), acknowledge Sabbath's influence on their sound and understand doom's history, using elements of all its various guises to create a sound that blends its past with its present, jamming grooves informed by that which has gone before but which are still very much of today, grooves that can now be heard and appreciated on the bands self-titled debut "Acid Mammoth". 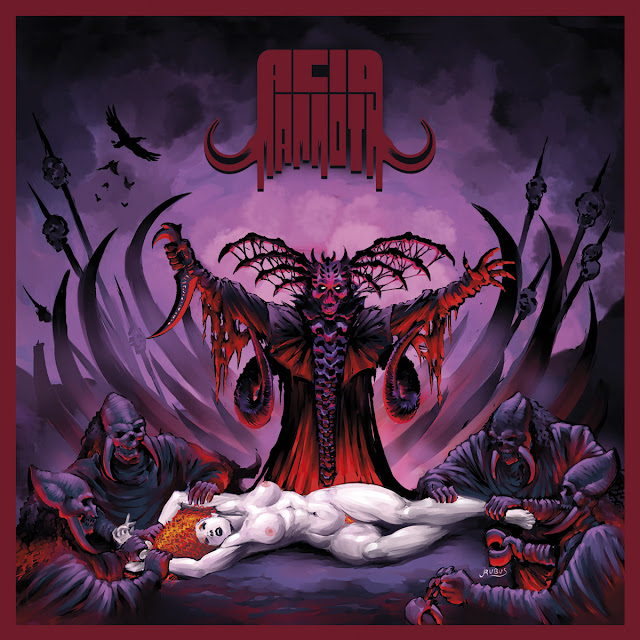 Although Acid Mammoth cite Black Sabbath as their main influence "Acid Mammoth" (the album) is not a recording to go to if expecting or wanting to hear rearranged Iommi riffs and Ozzy type nasal vocal tones, far from it, songs like opener "White Hag", "They Live" and the appropriately titled "Mists of Doom" may have their roots entrenched in the dank proto-doom grooves of the Birmingham four but are in no way bound to them, in fact they are probably closer in sound to the later doom of Candlemass than they are that of Ozzy & Co.  Clean mellow vocal melodies are the order of the day throughout the six songs presented here, melodies sang over a swathe of fuzz drenched and distorted  guitar riffage, grizzled bass and pounding percussion with the occasional scorching guitar solo punching through the mire to throw in a little light here and there. It is however when the band stretch out on longer songs like "Eternal Sleep", with it's undulating vocal melody floating over a backdrop of deliciously atmospheric and restrained doom , and the epic "Black Rites", with it's slightly gothic/occult vibe, shifting time signatures and dark psychedelic undercurrent,  that Acid Mammoth really come into their own and show what a force they can be when given a larger canvas to paint their deliciously dark grooves on.
Check 'em out ..