When reviewing Tuna de Tierra's "EPisode I Pilot" back in August 2015 Desert Psychlist made the observation that the Italian trio from Napoli existed in a hinterland between the riff heavy fuzz of the likes of Fu Manchu and Kyuss and the more experimental stoner/psych of the likes of Sungrazer and Colour Haze, well the band, Alessio De Cicco (guitar, vocals), Luciano Mirra (bass guitar) return this year with a new drummer, Marco Mancaniello, and a new full length album, "Tuna de Tierra" (Argonauta Records), so let's see if those observations still ring true. 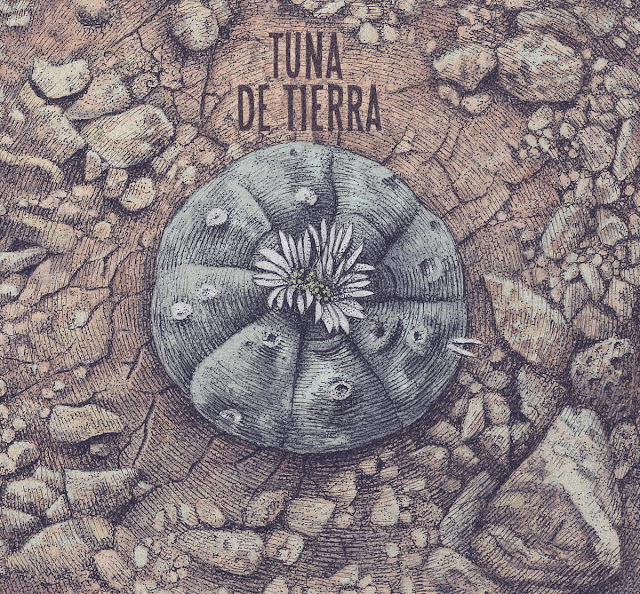 As the opening bars of instrumental first track "Slow Burn" ring out from the speakers its fairly obvious that Tuna de Tierra's modus operandi of delivering heavily fuzzed refrains over an array of ever shifting rhythmic groove is still in place, De Cicco's guitar soars like an eagle riding thermals over Mirra's throbbing bass lines and Mancaniello's solid, tight percussion, the resulting sound having an almost Floydian feel to it. Next track "Morning Demon" sees Tuna de Tierra hitting a Colour Haze-ish groove fractured by moments of gnarly fuzz drenched aggression with Mirra's bass the anchor around which De Cicco weaves  a mixture of lysergic guitar textures and crunchimg riffage while at the same time delivering mellow, clean and slightly laid back vocals ably supported from beneath by Mancaniello's sympathetic drumming. "Out of Time" follows and finds De Cicco laying down gentle vocal tones over the top of a circular guitar motif backed by liquid clean bass lines and restrained jazzy percussion. "Long Sabbath's Day"could almost be described as a spiritual and incorporates gospel like handclaps backed by what sounds like a bass string being stroked and tapped with De Cicco crooning and moaning gently over head. "Rise of the Lights" changes the mood by jamming a groove that has an almost indie blues vibe and recalls to this listeners ears the early sound of British alternative/indie blues purveyors Gomez both musically and in its vocal melodies. "Mountain" again sees Tuna de Tierra wandering into Colour Haze territory only this time with a hint of eastern mysticism bubbling just beneath the surface. Mancaniello lays down a restrained but totally effective tribal beat around which Mirra weaves intricate and jazzy bass lines, De Cicco adding subtle textured guitar colouring while gently crooning dreamy, heartfelt vocals. Final song "Laguna" initially keeps things dreamy and lysergic with De Cicco's warm vocals sitting a little lower in the mix but then slowly grows in tempo moving briefly into a heavily psychedelic blues groove before morphing once again and erupting into a fuzz heavy stoner refrain and taking things to a deliciously noisy close. 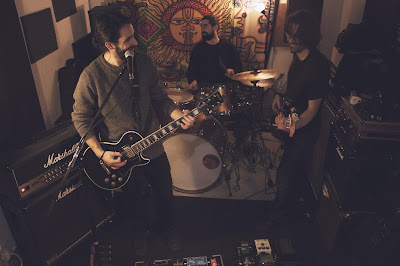 Heady, trippy and experimental yet at the same time solid, fuzzy and structured "Tuna de Tierra" is an album that delivers on many levels and is one that deserves to be heard by those that like their desert/stoner grooves hard and heavy as well as those who prefer their grooves a little on the loose and lysergic side.
Check it out ....