Toronto's Olde, the brainchild of guitarist/producer Greg Dawson, came into existence not as a bunch of friends who decided forming a band would be a good way of getting women and drugs and not either as like-minded musicians who bumped into each other on a regular basis and decided to do something together, the truth is these guys had never even set eyes on each other before, not even when recording their parts for the bands debut "I", the musicians coming separately to the studio to add their contributions on the strength of the demos Dawson had sent out to each and every one of them. The  prospective members, Ryan Aubin (drums), Chris Hughes (guitars), Cory McCallum (bass) and Doug McLarty (vocals) eventually met on guitarist Dawson's driveway and thankfully hit it off, and so Olde, as a proper living breathing collective, were born. The band followed up "I" with "Shallow Graves" a four song EP that cemented them in peoples minds as a band on a mission and a band with something to say and have recently recorded and released their second full length album "Temple" (STB Records). 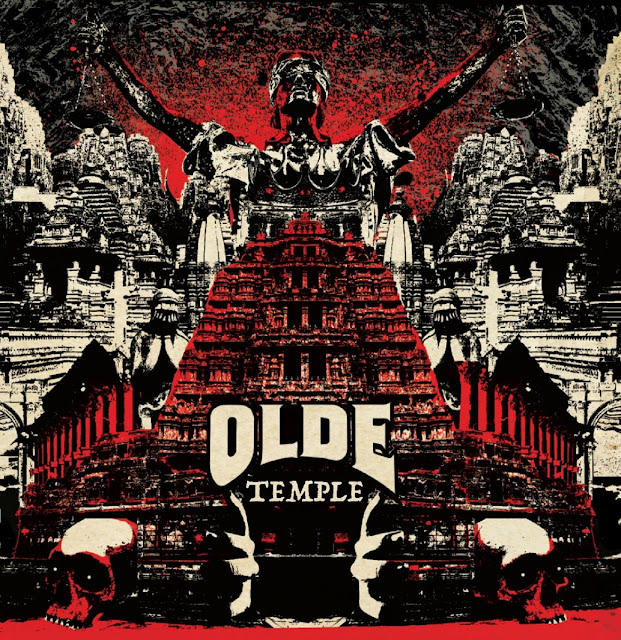 Olde describe what they did on "I" and "Shallow Graves" as "an exercise in force and restraint" and in the most part this stands true of "Temple" as well but that's not to say there are not elements of subtle progression and musical muscle flexing to be found amongst the seven songs that make up "Temple". The bands modus operandi of short sharp bursts of hardcore tinted doom are stretched a little further here with Aubin and McCallum laying down swathes of  pulverising bass and drum driven groove over which Dawson and Hughes adorn with dark crunching downtuned riffage and searing non-indulgent guitar solo's ,all topped off with McLarty's gruff, larynx shredding vocals. From the in your face, pacey aggression of "Subterfuge" to the slow ,low and grindingly menacing refrains of "Castaway" there is hardly a moment for the listener to take a breath as the band lurch from one gnarled refrain to another managing never to repeat themselves while maintaining a level of intensity that at times can feel exhausting yet at the same time exhilarating. The band do step out of their safety zone on occasions as on "Now I See You" with it's proto-doom/metal-like groove and addictive vocal meter and on the excellent "Maelstrom" which uses clever touches of bluesy guitar colouring to make its presence felt, on the whole though its the full on, foot to the pedal, fuzz drenched stoner metal and intense sludge tinted doom played with intensity and passion that makes listening to "Temple" such a worthwhile audial experience.
.Check it out ....