Whether its the economics of touring with just two members that has been the catalyst for the current glut of rock duo's to assail our ears Desert Psychlist does not know, but bands, stretching right across the many genres and sub-genres of the underground rock scene, from Year of the Cobra to Telekinetic Yeti, seem to be finding an audience eager to lap up their stripped down grooves.
Montana's Swamp Ritual, Dustin Fugere (bass, vocals) and Sid LaTray (drums, vocals), put their own twist on this two members, two instrument phenomenon and it's a twist listeners can witness for themselves on Swamp Ritual's brand new opus "Sunchaser". 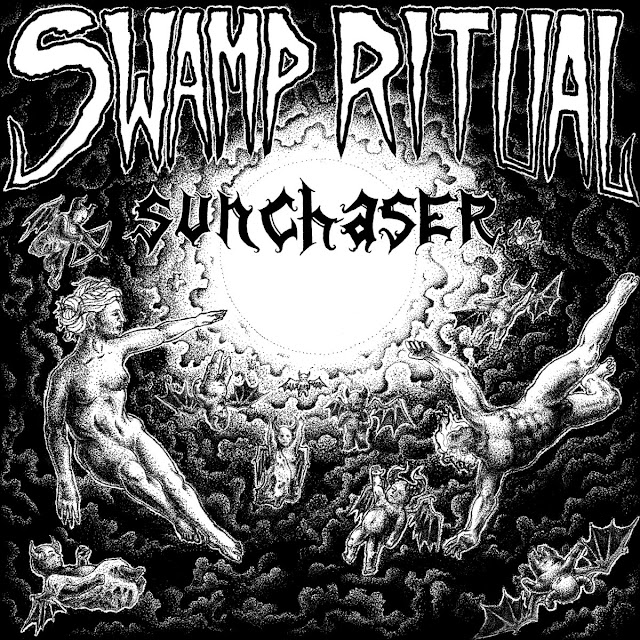 The bass guitar is a lot more than just a prop to anchor a groove and in the right hands it can be a weapon of mass destruction with a vast array of sonic possibilities. Swamp Rituals's Dustin Fugere understands this and uses every inch of his fretboard in an attempt show the instrument in a new light, employing his four stringed guitar as both a lead instrument and as a means to drive the groove, combining with Sid LaTray's pulverising percussion to fill every song on "Sunchaser" with a mixture of deep rumbling undertones and dark swirling dynamics. LaTrey meanwhile, on drums, seems destined for, at the very least, a spell in some sort of recovery unit such is the force and power he brings to the table with his percussive contributions.. Fugere and LaTray  also share vocal duties throughout the albums five songs and hereby lies the twist spoke of in this reviews intro. the pair do not approach dual vocals in a "traditional" sense as in say lead vocal/backing vocals and not even in a twin harmonies sense but more of a two men roaring at you in unison style, the resulting effect, at times,  coming across like the raucous voices found singing on the terraces of a British football/soccer match, something that works especially well on the slightly throwaway party song "Lawnmower" with it's "I mow the lawn when I'm high, Take some shrooms, put on some doom" lyric. It is, however, when Swamp Ritual get down and seriously doomy that they really come into their own and shine as on the epic instrumental "The Bearded Dragon"with its mixture of low slow dynamics and moments of manic furiosity, and the moody psychedelic tinted closer "Malacastria" a place "Where dead walk ghouls have their home" and "Spectres sneer and the phantoms moan", sang/shouted over a backdrop of growling stoner doom groove. 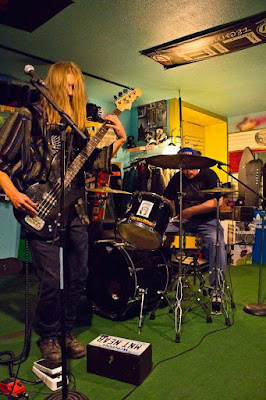 Swamp Ritual describe themselves as "a couple of scuzzballs who needed to play something loud" and with a need to create a sound that "can always be felt as well as heard". Well with "Sunchaser" it seems those needs have been well and truly met..
Check it out .....