Portuguese fuzz'n'rollers The Black Wizards will be no strangers to those who prefer their grooves a touch psychedelic, a touch fuzzy and a whole lot bluesy. The quartet of  Joana Brito (vocals, guitar), Paulo Ferreira (guitar), João Mendes (bass, acoustic guitar) and Helena Peixoto (drums, congas, backing vocals) have previously released one very impressive EP, "Fuzzadelic" and one equally impressive album "Lake of Fire" both of which were very well received by critics and fans alike. The band are now hoping for a similar reaction for their second and latest album "What The Fuzz!" (Raging Planet). 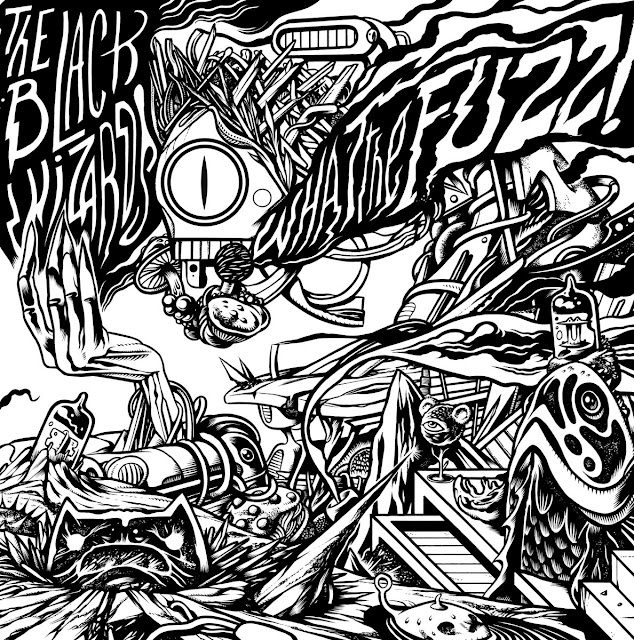 The incredibly short and noisy "Side by Side" is the intro by which you enter into The Black Wizards world of bluesy torch songs, raucous riff fuelled rockers and fuzz drenched jams and it's a world you will want to dwell in for some time. From the achingly beautiful "Freaks and Geeks" where Brito's majestic vocals soar and swoop over a backdrop of searing slow blues groove. through to the country edged gospel feel of  "Everything Is Good Until Trouble Comes" the listener is treated to a masterclass in fuzz edged delta groove and bluesy vocal pyrotechnics. Brito's vocals throughout "What The Fuzz!" are revelation, the guitarist/ vocalist's natural vibrato adding a unique edge to her powerful tones, the singer using it as a tool to add extra layers of texture to each songs lyrics coming across at times like a female version of (British 70's rock band) Family's vocalist Roger Chapman but a whole lot easier on the ear. The Black Wizards are not all about one members vocal gymnastics however and beneath that voice the listener will find a band of musicians who are wholly on top of their game. Ferreira compliments Brito's vocals and crunching powerchords with scorching lead work, his solo's and riffs filled with emotion and feel taking off soaring flights of fancy one minute laying out with intricate fills and licks the next. Every band needs a good rhythm section to drive its grooves and The Black Wizards have a superb one in Mendes and Peixoto,  Mendes holding down the bottom end with a mixture of bone shaking distorted riffs and liquid clean lines and motifs while Peixoto brings a natural Latin swing to both her drumming and assorted percussion, the pair together laying solid foundations for Brito and Ferreira to build upon. 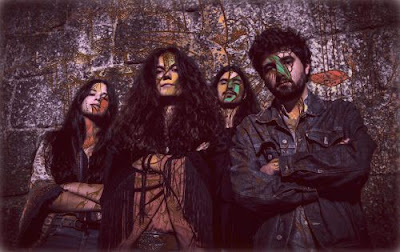 "What The Fuzz!" is a fine album delivered with a high level of musicianship and packed with a range of blues rooted songs that run from the stonerized to the countrified, paying homage to the genres history while at the same time giving it well needed shot in the arm.
Check it out ...