Sydney, Australia's Comacozer raised the bar high with their 2016 release "Astra Planeta" an instrumental album brimming over with eastern tinted mystic vibes and swirling heavy psych grooviness, the albums scorching guitar fuelled grooves scoring a minor triumph for non-vocalised rock music.  The problem with releasing an album with such a strong sonic impact is that its always going to beg the question "how are we going to follow this?" Well with the release of their latest album "Kalos Eidos Skopeo" we are about to find out. 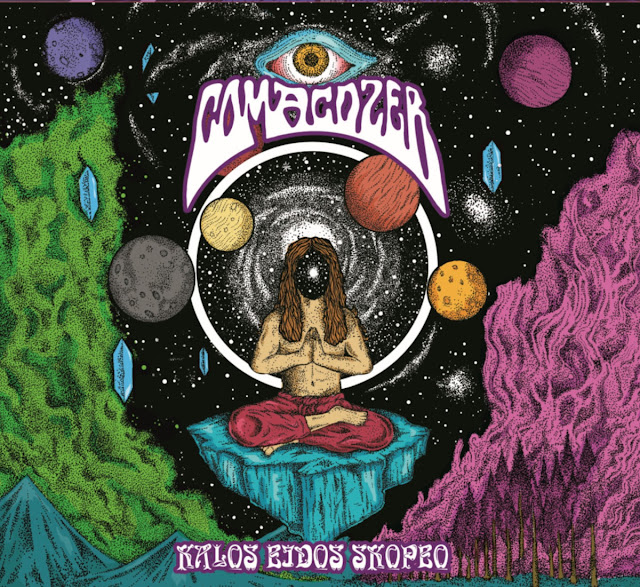 The first thing the listener will notice when giving "Kalos Eidos Skopeo" a spin is there is an undeniable heaviness to the proceedings, a heaviness that although present on previous outing "Astra Planeta" here seems to be magnified. Whether the band have been listening to a steady diet of Ufomammut and other bands in that vein, Desert Psychlist knows not, but there is definitely a grittier, more intense feeling to be found amongst the four epic sized grooves that make up this new album. This heavier feel is most evident on the albums opening track "Axix Mundi" a hypnotising doom tinted slow burner, briefly broken by a deliciously lysergic mid section ,that gradually grows in depth and intensity, adding little subtle layers, as it wends its way to its noisy fuzz drenched climax.  Ambience and tranquillity, however, are never far behind in the world of Comacozer  and these two elements are used to great effect on the superbly eclectic "Enuma Elish" a track that sees guitarist Rick Burke laying down a swathe of psychedelic textured  six-string colouring around Frank Attard's swirling array of synthesised keyboard effects ably supported by Rich Elliot's deep booming bass lines and Andrew "Pana" Panagopoulos's complex drum patterns that then erupts into gnarly fuzz drenched refrain that the listener will not want to end.
Between these two tracks of essential heavy psych reside "Nystagmus" and "Hylonomus", the former a moody eastern flavoured piece that finds Burke gently picking effect pedalled arpeggios over Pana's intricate jazzy percussive patterns that are perfectly underscored by Elliot's thrumming bass motif and Attard's swooping synthesised effects, the latter a lysergic romp through the cosmos that suddenly takes off into a stratospheric space/psych jam that in places recalls the more rockier moments of British psych/prog/rave exponents Ozric Tentacles 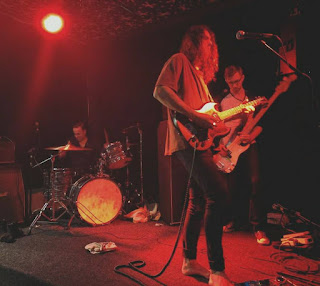 The Eastern/North African themes Comacozer explored on "Astra Planeta" are still in evidence on "Kalos Eidos Skopeo" but this time around the band have edged them with an element of gritty darkness, the band finding a balance between the exotic and the brutal that is both intoxicating and exhilarating.
Check it out....