Seems quite a time since Desert Psychlist has had the pleasure of featuring a Polish band on its hallowed pages so it is doubly enjoyable that when that country does returns onto our radar it is with a band so damn good it would be remiss of us not to shout it to the world.
Dogzilla are a trio hailing from Tamöw, Poland and consist of the mysteriously named KW (guitar, vocal), JS (bass) and NZ (drums), and are a band who deal in heavy assed sludge/doom grooves tempered with elements of swirling space and heavy psych, all of which can be heard on their soon to be released debut album "Astral Worship" (30th September). 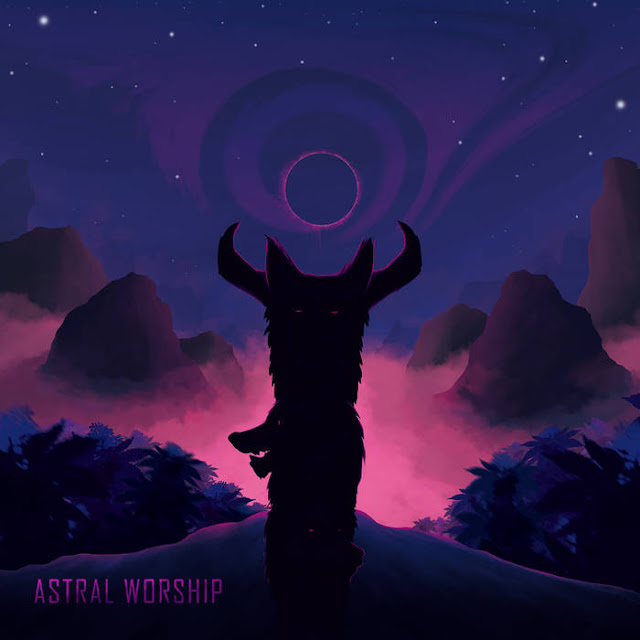 Monster guitar riffage roiling down on you like boulders from a mountain, thunderous bass lines that rumble and groan like distant thunder and pulverising percussion that shakes the very earth beneath your feet are the basis around which a mixture of throaty clean and bear like bellowed vocals tell tales of distant stars, cosmic travel and arid planets. Now from that description you would hazard a guess that Dogzilla are all about brutality and bluster and just another in a long line of  heavy stoner bands more intent on riffs than songs but you would be wrong. It is true there are plenty of riffs and refrains to be found throughout the five songs that make up "Astral Worship" but they are ingrained with subtle touches of lysergic colouring and spacey cosmic texturing, the band, at times coming, across like a sludge metal version of Hawkwind especially on the latter half of album closer "Andromeda". The band never let the riffs dictate the songs however and  move seamlessly through a gamut of different dynamics, tempos and time signatures to keep the listener both interested and on their toes, never sure where the band might take them next. Eastern motifs, moments of ambient space, bluesy guitar solo's, lashings of grinding fuzz and a barrage of pounding rhythmic groove are all thrown into the melting pot to make this not only one of the most interesting albums of its genre but also one of the most satisfying.
Check it out .....