Absinthe. a strong alcoholic beverage often the favourite tipple of 19th century France's many resident artists and novelists, was also believed (wrongly) to be a hallucinogenic able to inspire high levels of focus and creativity within its drinkers. Now whether this little piece of modern mythology/folklore was the inspiration for Maryland trio Mountainwolf to name their latest opus "Absinthe Moon"(Tiny Horns Records) you will have to ask them but there is an undeniable lysergic quality to be found within its diverse grooves as well as an equally high level of focus and creativity. 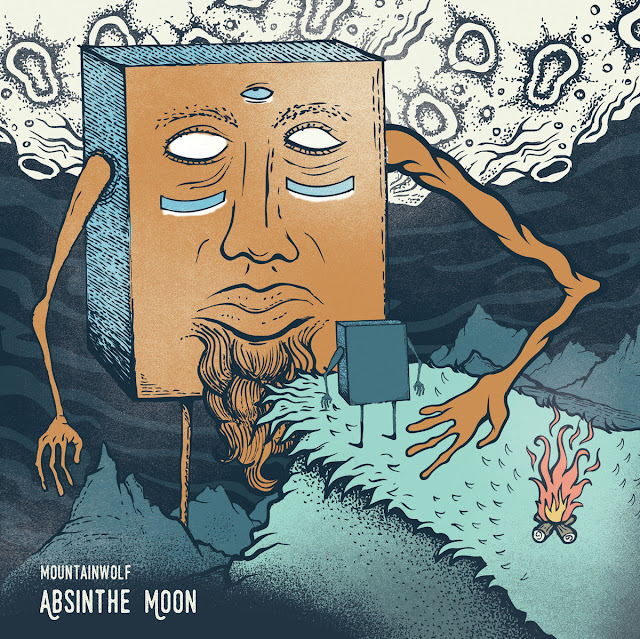 "Release me from this prison that you have created for me" screams  vocalist/guitarist Tyler Vaillant on opener "TWST" his clean slightly manic roar, bookended by dissonant crunching chords. booming bass lines (Chris Gipple) and shimmering percussion (Tom Coster), a feral plea to be released from the restraints of an existence not of his choosing. The song and indeed the lyric serve as the perfect opener for an album that breaks as many rules as it creates new ones, an album that flits across genres and musical styles like a bee collecting nectar, unaware that along the way it maybe creating whole new species with its accidental cross pollination. Alt/Grunge dynamics, stoner/hard rock fuzz, psychedelic funkiness and exotic eastern textures are all mixed, blended  and used to great effect throughout "Absinthe Moon" giving the album an at times experimental feel yet one that never strays too far out into the stratosphere, it's swirling heady forays into the unknown anchored to earth by its complex and unrelenting heavy rock rhythms, the resulting sound almost as breath-taking in its diversity as it is in its execution.
Check it out ......