Imagine waking up in an operating theatre to find yourself surrounded not by white suited surgeons trying to save your life but by three hairy stoners trying to slay you with their raucous fuzz drenched grooves, frightened and alone you then scream for a doctor only to see all three turn as one and utter the words...."Yes!". Sound like a scene from "The Simpsons"? Well you could be closer than you think!
Dr. Jon (guitar/vocals), Dr. Love (bass/vocals) and Dr. Johnston (drums) are Dr. Colossus a trio hailing from Melbourne, Australia who use America's yellow tinted dysfunctional cartoon family "The Simpsons" as the inspiration  for their brand of fuzz drenched riff'n'roll, something that on paper sounds a little ridiculous but in reality strangely works. The band have just recently released their latest album (or should that be episode) "The Dank"(Death Mountain Records). 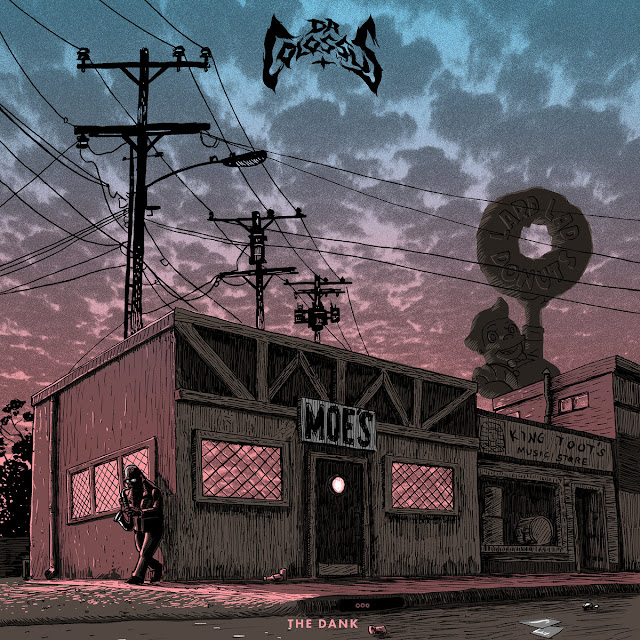 "Thrillho" opens things with a slow throbbing doom riff over which reflective, woe is me type lyrics are sung from the viewpoint of Bart Simpson's long suffering best friend Milhouse. Dr, Jon's clean, strong vocals ooze with a knowing resignation of goals unattainable as he sings "My best friends sis, wanna kiss her sexy lips" against a backdrop of (Jacques) Brel-like vaudevillian melancholy and fuzz drenched stoner swagger.
"Future Bart" struts straight out of the starting blocks on a swirling circular guitar refrain supported by Dr. Love's spine-crumbling bass and Dr. Johnston's pulverising percussion. The song's doom desert groove and vocal refrain of "I wash myself with a rag on a stick" harks back to a Simpson's episode where Bart is shown his future and finds sister Lisa has become President of America and Bart is a failed musician forced to eek a living playing gigs at a beach bar.
"It's Still Good" echoes the mantra Homer voices as he chases a pig he was cooking  all over Springfield on a mobile barbecue after vegetarian Lisa has pushed it downhill. The song sees Dr.Jon and Dr, Love trading off vocals over a crunching stoner groove and has an almost "pop" feel to it owing to its addictive chorus and fresh bright dynamics.
"Dr. Colossus" follows and sees the band veering towards darker territory telling the story of Springfield's very own mad scientist over a soundtrack of menacing low slow grinding riffage and pulverising rhythms coated in a mixture of low,sinister and clean, roared vocals.
"Excellent" is an ode to the Simpson's resident all round not so nice guy "Mr.Burns"set to a backdrop of crunching desert groove taken to an epic close on a swathe of discordant guitar riffage.
"Holy Driver" utilises a throbbing, heavily distorted bass line as the anchor for a growling stoner riff fest that along the way references the great Ronnie James Dio in snatches of melody and phrasing.
"Lemonade" with it's "Eat my shorts" vocal refrain and totally addictive groove is one of the highlights of the album, Built around a rumbling bass and guitar refrain perfectly supported by Dr. Johnston's tight economic percussion the song rolls along with an understated menace yet retains that tongue in cheek humour that colours all the bands work both on this album and their previous work.
"Dr. Tongue" closes the album with a doom flecked ode to lust, loss and infatuation edged with a bluesy swagger and contains the immortal lines  "I don't believe it but now my pants are chaffing me" .....pure poetry. 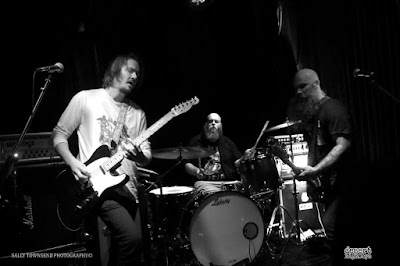 Some might see Dr. Colossus's Simpson's themes  as being a tad gimmicky but with so many bands writing songs about a cloven hoofed man with horns and a forked tail, who also only appears in books and on screen, then that argument falls a little flat. Desert Psychlist's advice is to just listen with an open mind and enjoy.
Check 'em out ...