Touring can be an expensive business, you often have to speculate to accumulate and the returns for that speculation are not always immediately forthcoming, it may be a while before you recoup on your investments with those returns often coming in the shape of album and merchandise sales something that cannot be usually gauged until the tour is over. With the slow demise of the "traditional" record companies it is now often the band/artist who has to find the means to fund, not only, the initial layout for touring but also for recording and releasing their material.
Fresno's Beastmaker are planning to tour Europe and in order to help fund this excursion the band are, with a little help from Rise Above Records and Branca Studio, releasing an EP of tunes that for one reason or another didn't quite make the cut for their "Lusus Naturae" album (2016). The EP "Coven Born" will only be available digitally and only for a short period of time. 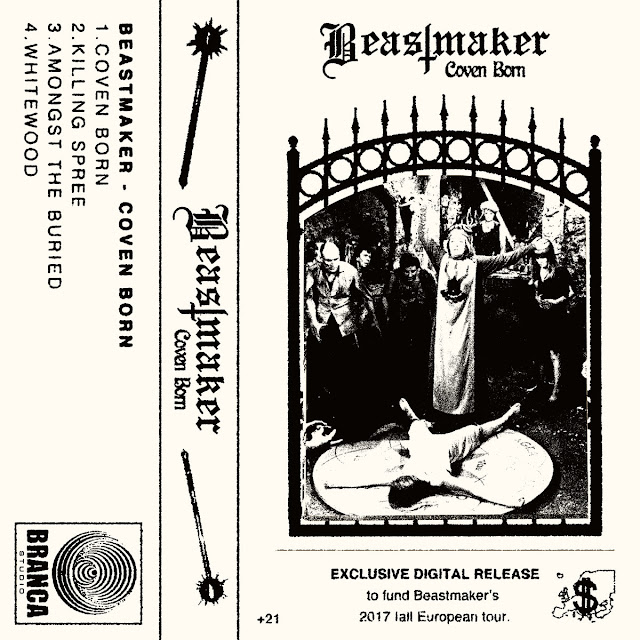 The first thing that hits the listener about the four songs that make up "Coven Born" is the quality of both the songwriting and their sonic impact, these are not songs left off an album because they were not good enough these are strong, powerful tunes that may have missed the cut only for the fact other songs that did were, at the time, deemed just that bit stronger.
Title track "Coven Born" opens with keyboards playing an eerie horror film inspired motif before Trevor William Church announces his arrival with a similarly eerie guitar refrain backed by John Tucker's huge grizzled bass and Andres Alejandro Saldate's punchy drums. Church, who also provides vocals, is right up front in the mix his clean, slightly gothic tinted, tones combining with his undeniably deft guitar skills to give the song an epic doom feel that leans more towards the altar and grave outpourings of Candlemass than the usual Sabbath comparisons that are often thrown the band's way.
"Killing Spree" follows a similar path to Sabbath's iconic song "Black Sabbath" in that the songs narrator is visited by an apparition while lying in his bed only this time the perpetrator of this visitation is a female with intentions a little more gruesome than just pointing a finger. Nicely paced with a chugging groove interspersed with clever little hooks it is hard to understand why this has never saw the light of day before now.
Tolling bells herald the next track "Amongst The Buried" the song again utilising a bedrock of  gnarly distorted bass and pulverising percussion for Church to decorate with his distinctive vocal tones and fret melting guitar pyrotechnics.
"Whitewood" closes the EP and finds Beastmaker still working within their chosen field of horror inspired grooviness but  shaking those grooves up with little touches of lysergic colourings and textures as well as throwing in a few well chosen soundbytes lifted from classic horror movies Church also lays down some truly incendiary neo-classical shredding expertly backed up by Tucker and Saldate. 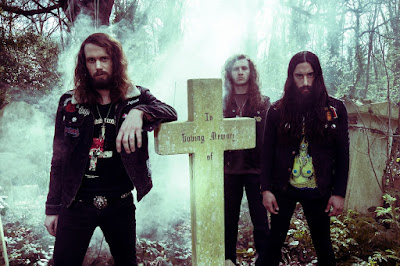 Beastmaker have stated that as soon as their proposed European tour is over "Coven Born" will no longer be available to the general public so do yourself a huge favour and snag it now before its too late, you will not regret it!
Check it out ....