Turbobobcat, a quartet from Catania, Sicily consisting of Federico 'SaturnFaun' Indelicato (vocals/rhythm guitar), Davide 'Mr. White' Guardo (lead guitar), Martino 'Mr. Firebird' Razza (bass guitar) and Pietro 'Pyt' Leanza (drums) were formed as recently as 2016 but immediately gelled as a musical force, the four musicians finding  common ground in their love of Monster Magnet, Fu Manchu, Motorhead and Orange Goblin, the band fusing elements of their heroes into their  own sound,  a sound soaked in a profusion of rhythmic bluster, heavy fuzz and devastating  distortion. Turbobobcat, not wanting the grass to grow too fast under their feet wasted no time in formulating their ideas into songs and were soon committing those songs onto tape, the result being this their debut EP "Pentastar Rocket Ride" 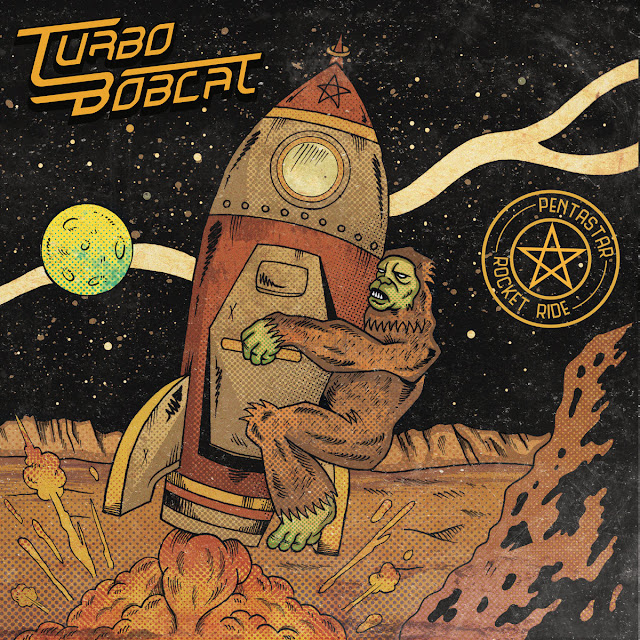 "Pentastar" erupts into being with wave of circular guitar riffage and howling feedback then explodes into a bruising desert/stoner groove with Leanza's powerful drum beats the anchor around which Indelicato's rhythm guitar and Razza's bass lay down a swathe overdriven groove. Indelicato as well as his rhythm guitar duties also supplies vocals, his clean, edgy tones roaring tongue in cheek lyrics telling of "smoking shitty rays of light" amid "stoned distorsion, engine combustion" and " Weedian spacecrafts". Around these tales of cannabis tinted space and time Guardo adds dark swathes of gritty guitar colouring, filling in the spaces the others leave behind with scorching solo's, spacey licks and clever fills, the lead guitarists contributions the icing on a very tasty cake.
"TURBOBOCAT" follows, a song that can be perceived either as a story of a bunch of desperado's robbing their way across the country or as a not-so veiled celebration of being in that ultimate of gangs...a band. Born out of one of those rolling refrains that early stoners Fu Manchu were famous for the song has a distinctive 90's desert feel, a feel further enhanced by its heavily fuzzed chainsaw guitar tones and its furiously driven bass and drum groove.
"Bigfoot (Ruler of the Shire)" opens with the voice of a park guide welcoming you to Yellowstone Park and to "Walk in line, hold tight onto your cameras" before we are thrown into a chugging rhythmic guitar refrain supported by solid drums and bass over which Guardo adds deft touches of fuzz drenched six-string colouring. Over this gamut of blues tinted groove and fuzz soaked riffage Indelicato takes on the role of narrator and principle character lifting his voice into powerful rock god mode for the former and dropping down into guttural growling for the latter shifting between the two styles with consummate ease and giving the song an almost cinematic feel and closing the EP on a strong and very enjoyable high.

Italians are well known for their stylish fashion sense and exquisite food, what they are less known for is their hard rock/stoner riffage and raucous rhythms but that might all change once the world catches an earful of Turbobobcat's  "Pentastar Rocket Ride"
Check it out ....