"We are here to soothe your ears with atomic waves of swirling cosmic heat" are the words with which Kyberox, a four piece band from Tacoma, Washington, introduce themselves. The band, Ashley de Choudens on vocals, Dave Marseillan on drums, Travis Pellegrini on guitar, and Chad Baker on bass, cite their influences as Kyuss, Acid King and The Sword and it would be foolish no to recognise elements of those bands grooves surfacing within the bands sonic cannon but that would only be half the story as becomes evident when giving their debut EP "Go Slow" a listen. 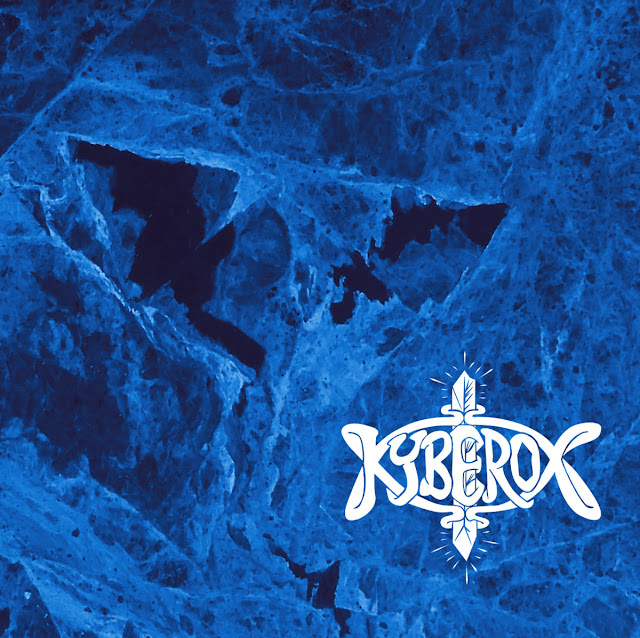 "Broken Will" is the first song to raise its head above the parapet, Pellegrini's fuzz drenched guitar circling around de Choudens' sweet but smoky vocals like a shark looking for its next meal before falling away and leaving Baker to take up the slack, his thrumming bass laying down a deliciously seductive groove which is expertly supported by Marseillan's deft percussive chops. Doom-ish but with a heavy leaning towards the occult rock end of the doomic spectrum the songs blend of atmosphere and swagger makes for the perfect introduction to what this band are all about.
"Strawberry Wizard" begins with Pellegrini chopping out a sparse palm muted guitar motif and is then joined by the rest of the band in a bluesy sabbathian groove underpinned by Baker's grumbling bass and Marseillan's busy, solid percussion with de Choudens voice soaring majestically above the maelstrom, her sweet powerful. slightly grainy tones a perfect foil for the equally powerful grooves surrounding them.
"Dathomir" opens with a seductive Baker bass motif that is then joined by Pellegrini's guitar in a bluesy psychedelic groove with Marseillan sitting just beneath adding sympathetic and intricate percussion and de Choudens crooning chanteuse- like over the top. The song then bursts into a heavy stoner doom refrain with de Choudens shifting through her vocal gears and wailing like a banshee over crunching guitar riffage and thunderous rhythm, The song swings back and forth between these two dynamics before, around the three quarter mark, taking off into and finishing on a raucous doom-ish desert groove.
"Blast" closes "Go Slow" and sees Kyberox running up the doom flag and waving it loud and proud for all to see. Dark swathes of grizzled fuzz, throbbing distortion and pulverising percussion are the bedrock over which de Chouden majestically wails, whispers and croons her tales of loss and longing her voice conveying a myriad of moods and emotions along the way. 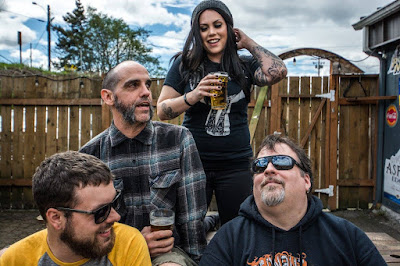 "Go Slow" is stunning EP that teeters between fragility and brutality without going overboard in either direction, Kyberox finding a balance between the two extremes whereby grooves that sit easy on the ear also retain a gritty raucousness, a raucousness that will please those of a more visceral bias.
Check 'em out ....