When a band describe their interests as "Warping the space/time fabric with sonic rituals, obliterating minds, crushing the sunlight" you know you need to take those guys seriously. Austin, Texas stoner doomanauts Destroyer of Light, Steve Colca (guitar/vocals), Keegan Kjeldsen (guitar), Penny Turner (drums) and Jeff Klein (bass), are the band in question and on the evidence of their latest offering "Chamber of Horrors" ( Heavy Friends Records) it would seem those words have more than a ring of truth to them. 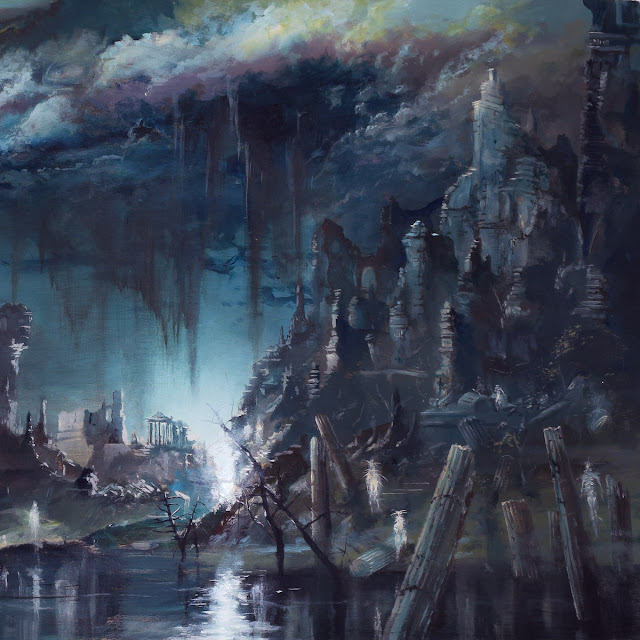 A huge metallic crash followed by various other metallic noises introduces " Whispers Into The Threshold" a song that could be described as an instrumental if it were not for the unintelligible and unsettling mumblings sitting just beneath the songs dark and achingly low, slow doom drenched two guitar refrain. This refrain, underpinned by thrumming bass lines, thundering percussion and embellished with  shards of scintillating guitar colouring, reverberates with a dark mournful menace before slowly gathering pace and suddenly coming to an end on a wave of stuttering riffage.
"Into The Smoke" follows, cleverly rearranging the previous tracks stuttering finale as the basis of it's intro before segueing into a fuzz drenched circular riff overlaid by Colca's bear like roar the guitarist/vocalist telling a subterranean tale of  being "paralyzed and suffocated" and "enslaved by the cave-thing" against a backdrop of pounding percussion, distorted bass and sludge thick riffery, the band finally bringing things to a close on a wave of soaring guitar solo's and howling feedback.
Next up is "The Virgin" an astonishing tale of sacrificial murder told in a mix of clean and growled tones over a menacing low doom groove replete with screaming movie soundbytes, Like an Italian horror movie set to a soundtrack of heavy sludge the song meanders menacingly through a series of differing dynamics and tempos, dragging in it's atmospheric wake elements of doom, sludge and even a little prog-like complexity.
"Twilight Procession" eases down on the throttle and finds the band exploring aspects of serenity and tranquillity in an instrumental piece that has an almost post-rock feel to it. Strangely beautiful and a complete contrast to the doom and sludge that has gone before ,the song serves as a brief respite before we dive headlong back into the swampy doom and sludge of the next track.
"Lux Crusher" finds Destroyer of Light taking a slightly more traditional stoner doom approach to things with Colca utilising a mixture of clean and guttural tones as he once again tells the story of ritual sacrificial  but this time from a victims perspective.
"Prisoner of Eternity" takes much the same "traditional" doom path visited on the previous track but this time with a little gothic colouring added to the mix. Heavy, pulverising riffage pushed by grizzled bass and powerful percussion is enhanced by a series of absolutely scorching blues tinted guitar solo's as well as a superb and powerful vocal delivery
"Buried Alive", a massive tome of atmospheric doom that builds layer by glorious layer closes "Chamber of Horrors" with not so much of a bang  more the sound of coffin lid slowly closing,.Low slow and extremely heavy, it's unnerving, superbly dark and macabre tale of  living interment is superbly delivered both vocally and musically by all involved. 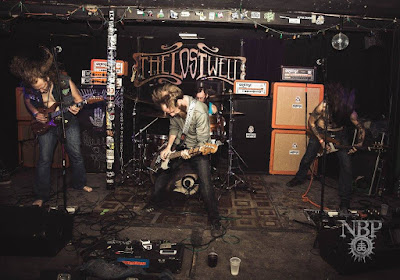 Themes based around  horror and the macabre are often the norm when it comes to the doom genre but rarely are those themes so well told or as vividly imagined as they are on the seven songs that make up  Destroyer of Light's latest opus. So roll up, roll up, visit your darkest fears and nightmares in the "Chamber of Horrors" and be prepared to be afraid .....very afraid!