Seems Ripple Music are getting a little adventurous and heavy with their choices of  whom to sign to their iconic label, the label have been releasing an increasingly diverse array of  albums of late, albums that criss-cross across the undergrounds many genres and sub-genres and range from heavy stoner doom to intricate post rock. Latest band to get the Ripple treatment are Poseidon a four piece from the mean streets of East London whose blend of post-rock nuances, progressive complexity and doom flavoured darkness can be heard on their Ripple Music debut album "Prologue". 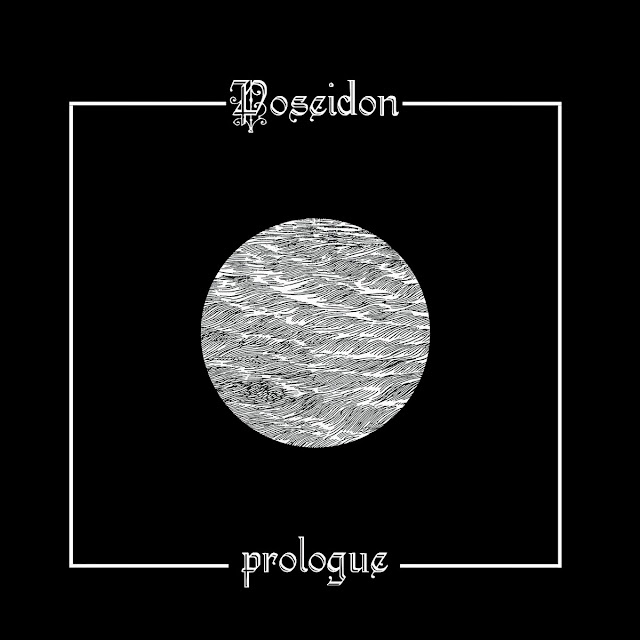 Droning feedback and noise heralds in first track "The Beginning ,The End, The Colony" and is gradually replaced by a crushing low, slow guitar riff supported  by deeply distorted bass and pummelling percussion with occasional shards of dark chordal guitar colouring fracturing the gloom, the song continuing along this path, building in atmosphere and mood, until clean clear, heavily phased vocals suddenly appear shining a little well needed light and much appreciated relief into the proceedings. This relief is short lived though and the band, Raza Khan (drums), Matt Norris (guitar), Matthew Bunkell (bass/vocals) and Jamie Starke (guitar) are soon taking off on another darkened tangent of crushing heaviness this time with Bunkell's vocals taking on a more visceral, animalistic tone beneath which Norris and Starke rip the air asunder with their riffs and licks and Bunkell and Khan shake the earth with their heavy rhythmic drum and bass grooves, the song finally reaching its climax almost as it began  with waves of thrumming noise and dark sustain fading into a deafening silence...breathtaking is to small a word for it!
In contrast the next track "Mother Mary Son of Scorn" is almost too pretty and nice to take in at first, it's gently strummed acoustic guitar backed by Khan's simple but effective percussion and enhanced with swirling six-string electric colouring, could almost be described as achingly beautiful if it was not for the morose lyrical content and the weary sadness of its vocal delivery.
Poseidon return to the crushing heaviness for "Chainbreaker", the song starting with a short soundbyte/narrative on the need to stop the endless grind of " the machine" a reference to the struggles we all deal with on a daily basis, living under the yoke of bosses and governments who have their own agendas. The song then explodes into a choppy stonerized doom groove, guitars crunching out fragmented powerchords that drip with fuzzy menace over a punishing backdrop of crashing percussion and grizzled bassitude with Bunkell mixing his vocal delivery between feral and clean.
"Omega" closes "Prologue" and begins with drone like effects groaning and growling like ships lost in a fog beneath another section of narrative which this time takes the shape of a religious sermon. The song then slowly gathers momentum with eerie dark guitar arpeggios gradually making way for slow throbbing riffage and pulverising percussion that then segues into a heavily fuzz drenched, slighty more aggressive doom refrain embellished with gravelly vocal tones and soaring guitar solo's. Epic, atmospheric and heavy it closes the album on a massive high. 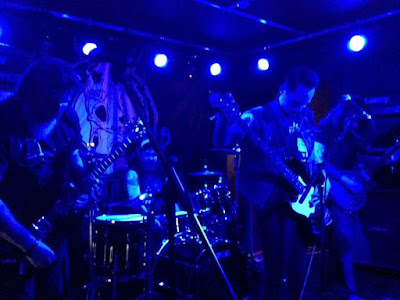 Musical heaviness cannot be easily measured and can be a matter of a listeners perspective, one man's Neurosis can be another mans Monolord and vice-versa, but there is no getting away from the fact that what Poseidon bring to the table will probably cause that said tables legs to buckle and leave a Poseidon shaped indent on its surface, such is the enormity of their dark dank grooves.
Check 'em out ...