The Arataca Stoned Farmers met by happy accident and from that accident a friendship formed, not content with just being friends the four guys took their friendship  one step further by forming a band! Angelo Bracht (guitar), Fernando Schmitz (vocals), Arthur Luciano Gunther (bass) and Gustavo Hansen (drums) hail from Joinville, Brazil a  metropolitan region where many of the population are descended from European stock.
The band, who have previously released a couple of two track affairs titled "Tales from Arataca" and "Tales From Arataca - Chapt. 2" respectively, have this time  gone to the previously unprecedented lengths of releasing an EP with a whopping three tracks on it, an EP that flies under the, not so surprising, banner of  "Tales from Arataca - Chapt. 03" 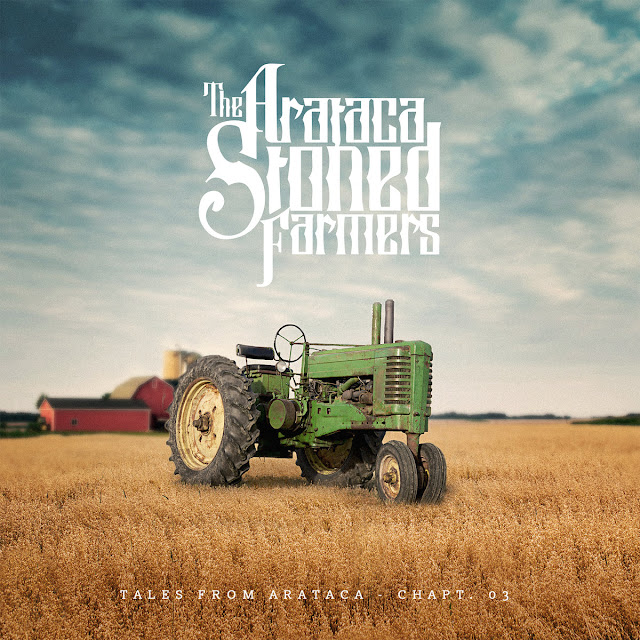 Those European roots mentioned earlier raise their heads at the start of "Melting Paintings" the song introduced by what sounds to be a soundbyte lifted from a German movie (Desert Psychlist is no linguist so this could well be another language) before exploding into crunching, fuzz drenched stoner groove replete with grumbling bass and pounding percussion over which are roared gritty clean vocals. Vocalist, Schmitz,  although not the most powerful you'll ever hear, compensates for his lack of rock-god vocal pyrotechnics by delivering good clean tones  phrased with a throaty grittiness that sit nicely within the songs mix managing to make their presence felt without the need for vocal showboating. Bracht's dark downtuned guitar tones and palm muted refrains give the song an almost proto-doom feel, the guitarist utilising touches of Iommi-esque colouring in his solo's, neatly pulling them off yet managing to avoid the pitfall of dragging the song into the realms of Sabbath worship by adding his own twist on them..
"The Harvest" follows,  a gnarly assed short sharp hard rock/stoner outing laced with metallic undertones pushed hard by Hansens' insistent percussion and Gunther's grizzled bass lines. "Mother Nature was my giver" sings Schmitz against a backdrop of crunching riffage and pounding rhythms before manfully roaring "It's harvest time" the songs addictive call and response chorus.
"Bullfrog" closes "Tales From Arataca -Chapt.03" with a fuzz soaked desert/stoner groove played at almost thrash-like tempo with Gunther's bass booming and growling beneath Bracht's swirling bluesy guitar riffs, licks and solo's expertly supported by Hansen's titanic drums. Schmitz pitches his vocals a little higher to match the songs furious pace the singer telling his tale of the humble bullfrog with clean clear but grit tinted conviction. 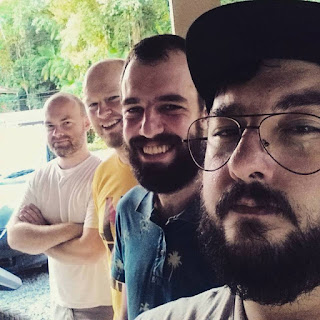 It seems The Arataca Stoned Farmers idea of releasing their music in short sharp short, sharp jabs that hit their listeners fast and hard is one that works well for them, leaving their listeners battered , bruised and breathless, not sure what as just happened to them but desperate for the next chapter.
Check 'em out ....