THE NECROMANCERS ~ SERVANTS OF THE SALEM GIRL ... review

Poitiers, France with a penchant for progressive tinted metal grooves sprinkled with a modicum of hard rock/stoner fuzz and a soupcon of psych and post-rock texturing. The band recently signed with those arbiters of good taste and all things fuzz shaped, Ripple Music, and have just released their debut album "Servants of the Salem Girl" 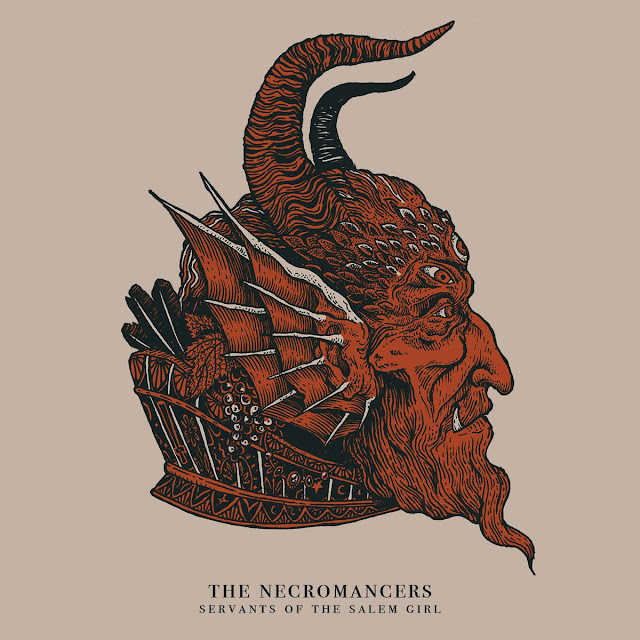 "Salem Girl Pt.I" opens innocently enough with Cornière laying down  a lone slow, low doom-ish guitar motif which, with a few minor alterations, is mirrored by Genais' cleaner six-string tones. This innocence and post-rock serenity is shattered when without warning when Evariste's grumbling bass and Rousseau's powerhouse drums join the party and the song explodes into a strident metallic stoner groove overlaid with a mixture of Maiden/Priest-esque guitar harmonies and crunching stoner riffage pushed hard by the aforementioned drummer and bassist.. Over and around this maelstrom of galloping NWOBHM and stoner/hard rock bluster are wrapped Cornière's powerful vocal tones, the singer's throaty mixture of bear-like roars and gritty clean croons taking the songs intensity and the bands sonic impact to a whole new level.
"Lucifer's Kin" is up next and sees Rousseau utilising all sorts of percussive tricks and effects to create a hellish atmosphere beneath which Evariste lays a slow, achingly sinister, bass motif that is then joined by Genais and Cornière's guitars in a groove that has a distinctive epic/traditional doom feel. The song then takes a left turn into Sabbath-esque proto doom territory with Cornière crooning tales of the horned one over swathes of grainy cantering riffage, the song swinging back and forth between these two dynamics of doomitude broken only by a short lysergic section where Genais lets loose with some truly scorching lead work before diving back into the traditional/proto groove to take the song to its screeching guitar fuelled epic finale.
"Black Marble House" opens with a palm muted guitar riff beneath chiming arpeggios then, after a brief moment of lone drumming, segues into deliciously addictive stoner/hard rock groove replete with little catchy guitar and vocal hooks. Cornière's vocals  here take on a more melodic vocal tone. slowly growing in graininess and grittiness as the song progresses, roaring like a wounded bear by the time the song reaches it's noisy pummelling climax. It's truly difficult to convey in words how damn good this tune is!
"Necromancers" is one of those tunes that despite its dark subject matter and chorus of "Hey Lucifer" has an undeniable feel good factor that will have the listener smiling like a demon with a new possession well before it reaches its sudden full stop. It's party time in Hades everyone, grab a pitchfork and boogie on down!
"Grand Orbiter" explodes straight out of the speakers on a wave of caustic wah drenched riffage and pulverising rhythm coated in melodic vocal harmonies then shifts down the gears into a slightly less abrasive groove with chiming arpeggios echoing over bone crumbling bass and intricate percussion with Cornière adjusting his vocal tones accordingly. The song moves through a series of shifting time signatures and rhythmic patterns without once losing its focus and finds Evariste and Rousseau laying down solid backdrops of diverse rhythmic groove for Genais and Cornière to embellish with superb guitar texturing and vocal colouring.
"Salem Girl Pt. II" ramps up the bands doom factor to eleven by opening with a low, slow and heavy refrain that sees Genais and Cornière crunching out heavily distorted riffs over a backdrop of titanic drumming and earth shaking bass. Not a band who like to overstay their welcome on one groove it is not long before The Necromancers move things along and take off on a tangent. raising both the tempo and temperature by heading into a more stoner metal direction fragmented by moments of post-rock/prog texturing. Cornière roars like an angry bull on the more aggressive sections dropping to a clean melodic tone in the songs quieter moments, his diversity of vocal styles matched by his equally diverse array of rhythmic guitar tones, but it is Genais' scorching lead work that is the cherry on this particular cake, the guitarist excelling in his choice of notes and chord progressions, exploiting spaces within the music to unleash searing guitar solo's that tear through the songs darkened groove like lightening tearing through a night sky, breathtaking at times. 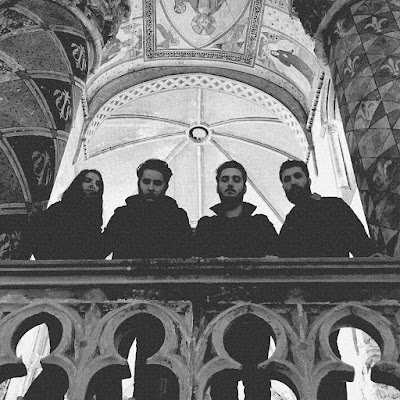 There has been some talk of late along the lines that the stoner/hard rock/psych and doom scene is  getting a little stale and old hat, saturated by an influx of similar sounding bands with a lack of originality all vying for the attention of what is essentially still a relatively small fan base. There may be some truth in that train of thought but while there are still bands seemingly appearing from nowhere to assail our ears with albums as good and as exciting as The Necromancers " Servants of the Salem Girl" then we shouldn't worry too much.quite yet!
Check it out .....