The people in charge of  the water for Austin, Texas must be adding something a little special to their supplies as this is the second album from the Lone Star States capital city to earn itself a review on Desert Psychlist's pages this month.
Texas trio Greenbeard wowed devotees of raucous riffage and psych drenched jams with their self titled album "Greenbeard" back in November 2014, which this writer dubbed, in his Bandcamp mini review, as "six tracks of glorious laid back desert rock that just kills!". The band followed this up, in July 2016, with "Stoned At The Throne" a release that saw the band moving up to a quartet and adding into their sandy desert sound an element of psych tinted doomy darkness , the resulting grooves garnering plaudits and praise from all who heard it. Two years on and the band, after a bit of  a reshuffle, are back as a threesome, Chance Parker (guitar/vocals), Dan Alvarez (bass), and Buddy Hachar (drums), ready to rock our world and blow our minds with their third and latest release "Lòdaròdbòl". 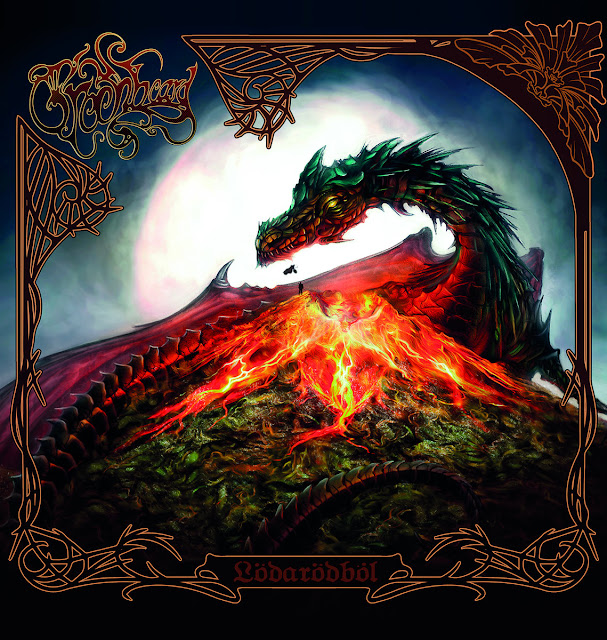 "Swing", a song split into two distinct halves ,kicks off "Lòdaròdbòl".  The first half sees Greenbeard hitting a Kyuss flavoured groove driven by Parker's crunching, palm muted, fuzz drenched guitar riff, beneath which Alvarez's bass and  Hachar's drums create a whirlwind of  insistent desert groove. The second half a calmer, slower more measured groove with the addition of keyboards (courtesy of guest musician Matt Bayles) giving the song a slightly heavier feel, both parts coated in Parker's clean, warm and totally effective vocal tones.
"Lanesplitter" finds Greenbeard in alt/grunge territory, Alvarez's slurred bass lines and Parker's warm clean vocals, swooping guitar fills and solo's are complimented by Hachar's loose but solid percussion, the trio creating a groove  that in places recalls those  of Seattle's Alice In Chains . Not a band content to hang on to one groove for too long the trio then take the song into the stratosphere by going into an extended psych drenched jam given extra depth by (Bayles) Deep Purple-esque keyboard flourishes and Parker's soaring solo's.
"Young Concussion" revisits the desert sound the band made their name with on earlier albums and hits one of those quirky, off-kilter grooves that would not of sounded out of place had it been found on one of Ex-Kyuss/QOTSA man Josh Homme's "Desert Sessions" albums.
"Battleweed" is up next an ode to the smoking of pre-battle exotic tobacco. The songs proto-metal vibe, tempered with elements of hard rock and blues, explodes out of the speakers on a wave of grizzled six and four string riffage pushed by pulverising percussion with Parker urging us all to "Grab your sword and shield and smoke your battleweed".
"Love Has Passed Me By" uses a chugging bluesy hard rock refrain to make it's point, Parker ruefully crooning of missed opportunity and regret his vocals pitched slightly lower than previous tracks giving the song an almost 80's gothic feel.
"Wyrm" finds Greenbeard experimenting with progressive rock hues while still maintaining a firm grip on the stoner/desert credentials that we the public first fell in love with them for. The songs backbone of crunching guitar, distorted bass and pounding percussion is superbly enhanced by the clever use of keyboards and synthesisers (Bayles and Jackson Webster ) these extra layers of instrumentation, combined with Parker's superb vocals and deft guitar solo's, giving the song an extra level of depth and focus. 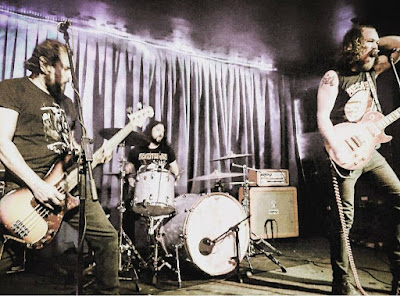 When Greenbeard first appeared on the scene it was hard not to  make comparisons with Kyuss and QOTSA and although there are still similarities to be found with those two iconic Josh Homme bands, an air of off kilter swagger and quirky rhythmic bluster, Greenbeard have, with "Lòdaròdbòl", found their own niche, their own sound and it's one you should all hear.
Check 'em out...