Progressive rock exploded into life in the 1970's, the genre utilising influences from a broad spectrum of musical styles that included classical music, psychedelic rock, folk and hard rock, blending these styles into complex musical arrangements that had an almost orchestrated feel about them. Musicians who played this music were mostly highly skilled technicians who were masters of their chosen instruments and although this resulted in some of the most exciting music of its time it was also the downfall of the genre. By the late 70's and early 80's prog had become a bit of a joke, the complex arrangements had become overblown and overindulgent, with prog bands releasing confusing "concept" albums that often had no basis in any sort of reality, and with musicians who were often more interested in displaying their technical prowess than playing for the song. The genre was slowly losing it's audience and by the time punk exploded in 1976 it was almost all over for prog!

Not quite though, there will always be musicians who strive for more in their playing, and so a new breed of musicians evolved, musicians who wanted to stretch themselves musically but at the same time keep at least one foot in the mosh pit, finding a balance between complexity and groove without compromising their ideals.
One such band to walk the line between hard rocking swagger and cerebral musicality are Texas quartet Blues Funeral, Jan Kimmel (guitar, Nord, vocals), Maurice Eggenschwiler (guitar, vocals), Cory Cousins (drums) and Gabriel Katz (bass), four guys with a penchant for complexity and metallic bluster who, last year (2016) caused a small tsunami of  appreciation to ebb their way with the release of their debut album "The Search". a wonderful blend of prog, hard rock and stonerized blues rock, This year (2017) the band follow up that album, striking while the iron is still hot, with a new opus "The Awakening" 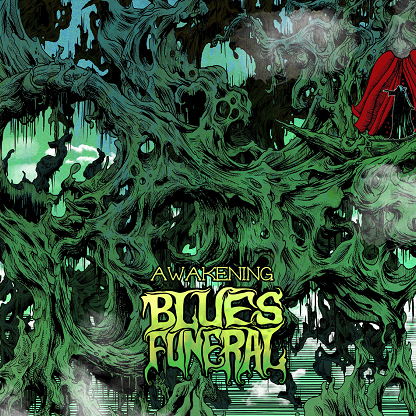 From the opening bars of first track "Shadow of the Snake" it's fairly obvious that Blues Funeral take their muse from a time far removed from the harshness of today's doom and stoner scene, the songs classic rock groove. driven by Cousins and Katz's sterling drums and bass work. is wrapped in swathes of swirling Deep Purple-esque keyboard colouring, courtesy of Kimmel, and enhanced by Eggenschwiler's crunching riffage, soaring solo's, Kimmel and Eggenschwiler sharing  vocal duties, both distinctive and powerful. This one song, on it's own, tells you everything you need to know about what Blues Funeral bring to the table, the band injecting a freshness and vitality into a genre of music, that those of us old enough to remember, thought had lost its lustre.
A mythical tale told in a mix of lone and harmonized vocals, title track "Awakening" sees Kimmel and Eggenschwiler trading off solo's and riffs around a crunching hard rock groove with Kimmel providing occasional tasteful keyboard flourishes while Katz and Cousins keep things tight and solid beneath.
"Illusion of Reality" finds Blues Funeral adding a touch of pop sensibility and hard rock swing into their groove. Easy on the ear and boasting killer guitar solos and an absolutely infectious singalong chorus the song shows this band are as quite capable of reaching a more mainstream audience as they are of pleasing those of a more discerning underground bias.
"Firedrake" heads back into classic/prog rock territory with Kimmel's keyboards pushed to the fore touching on classical themes and motifs along the way. There is an underlying doom-ish feel to the proceedings here, not in a modern brutal way but in a more traditional prog orientated direction, a feeling made even more prevalent by its lyrical content...  "Do you envy the dead? Gods cry when even Death feels sorrow".
"Casimir" sees the band exploring eastern themes and motifs over an ever shifting rhythmic backdrop, excellently provided by  Katz and Cousins, with Kimmel and Eggenschwiler trading melodies and harmonies both on guitar and vocals.
"Gathering Dust" ramps up the bands prog factor to eleven and sees the band switching seamlessly between differing time signatures and dynamics while at the same time retaining those doomish-hues hinted at in previous track "Firedrake". Atmospheric and emotive it is a fitting finale to a fine collection of songs. 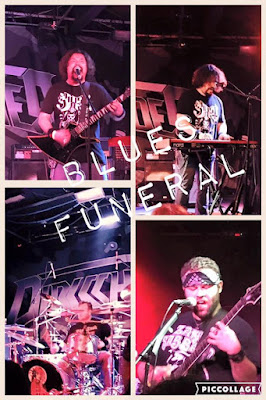 Prog is alive and well, it maybe not as you remember it back in the days of capes and dry ice but Blues Funeral, with "Awakening", have shown that you don't have to be overblown and overwhelming to show off your musical chops and that "there is still life in the old prog yet"
Check it out ....