This is a first for Desert Psychlist, reviewing two simultaneously released EP's from the same band on the same page! The band in question are a vocal (Kat), drum (David) and guitar (Brad) trio from Wollongong, New South Wales, Australia going by name of Night Goat, the EP's in question released under the cryptic titles "Chicken" and "Egg" (Lint Music) and as the band say on their Bandcamp page " it is up to you to decide which one came first" 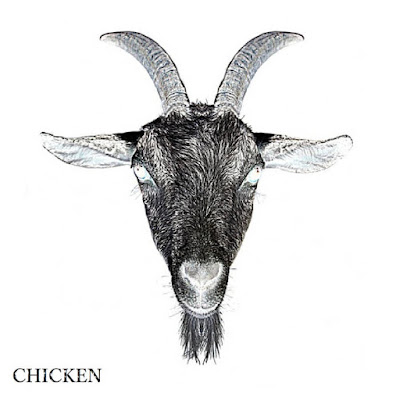 "Romanes Eunt Domus" opens "Chicken" with shimmering guitar arpeggios swept over solid and intricate drum patterns gradually growing in intensity until finally exploding into a heavy doom hued groove with those arpeggios making way for thick downtuned riffs and the drums taking on a heavier pounding approach. This sudden wave of heaviness then subsides to make way for the vocals and we, the listeners, get our first taste of what makes Night Goat tick and sets them apart from the usual doom drenched suspects. In a genre dominated by guttural howls and demonic harshness Kat's vocals come as a revelation, her warm smoky tones with mellow jazz colourings  ooze and soar over Brad's dark doomic guitar tones and David's diverse rhythmic patterns floating majestically above them like dark glistening oil sitting on a stormy blue sea.
"16 Ounce World" ramps up the jazziness with Kat crooning heartfelt lyrics of pain and despair over a backdrop of gently picked guitar complimented by sympathetic and understated percussion. Intense, emotional and achingly beautiful it's only fault is in the brevity of its length.
"Norwegian Blues" begins with Brad chopping out a lone and darkly distorted blues tinted guitar refrain before being joined by David's drums, the pair taking off into a thrumming heavy blues groove that although having its roots in the delta has, courtesy of Kat's mellow dark vocals,Brad's low menacing guitar tones and David's powerful percussion,  at least some of it's branches dangling menacingly over the cemetery gates of doom. 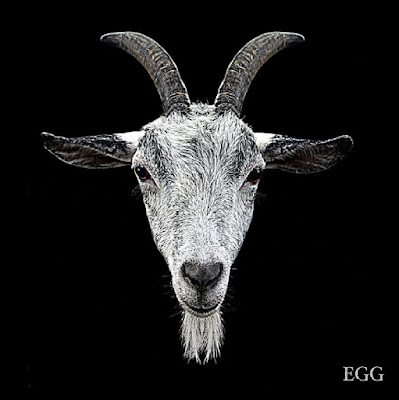 "Egg" is next...
"Egg" leans a little heavier towards the blues than "Chicken" with Brad and David bringing an element of swagger and strut to proceedings, albeit an element tinged with a large quantity of doomic darkness. This is most evident on opening song "How To Make Soap" where David opts for a guitar tone and delivery more akin to that of Led Zep's Jimmy Page in his darker moments than the Iommi-isms that are usually the norm when dealing with doom flavoured music. This bluesier approach pays off nicely when combined with David's Bonham-esque drumming, the pair coming together to lay a huge swathe of riffage and rhythm for Kat to counterbalance and decorate with her smoky jazz tinted vocal tones.
"Nebuchadnezzar Blues" continues the delta toned theme but this time approaches from a more "traditional" heavy blues direction and sees Kat briefly dropping her jazzy vocal inflections for a more straight ahead vocal styling. The song takes a turn towards the more metallic as it approaches its nadir with the Brad and David hitting a chugging stoner/doom groove to take things to a close.
"Have I Joined a Cult?" moves slightly away from the crossroads of Robert Johnson and finishes the EP with an atmospheric and moody jaunt that takes in elements of shimmering psych and moody doom  all coated in Kat's warm emotive vocals, the song bringing "Egg" to a close with style and finesse, leaving the listener with the unwavering feeling he/she has just heard something utterly unique and special. 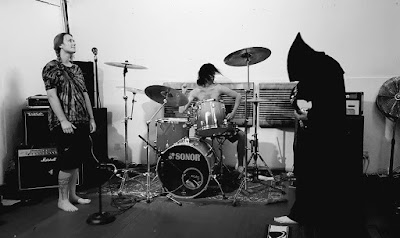