Heavy Temple like to wrap their true identities in a cloak of mystery, referring to themselves in articles and interviews under the pseudonyms of High Priestess Nighthawk (vocals/bass), Arch Bishop Barghest (guitar) and SirenTempestas (drums). The trio from Philadelphia have been together since 2012 , gaining a gamut of converts with their live shows as well as releasing one of the best EP's of 2014 with their debut "Heavy Temple".
The band have just released their new album "Chassit" a four track conceptual piece based around horror/fantasy novelist Stephen King's "Dark Tower" saga. 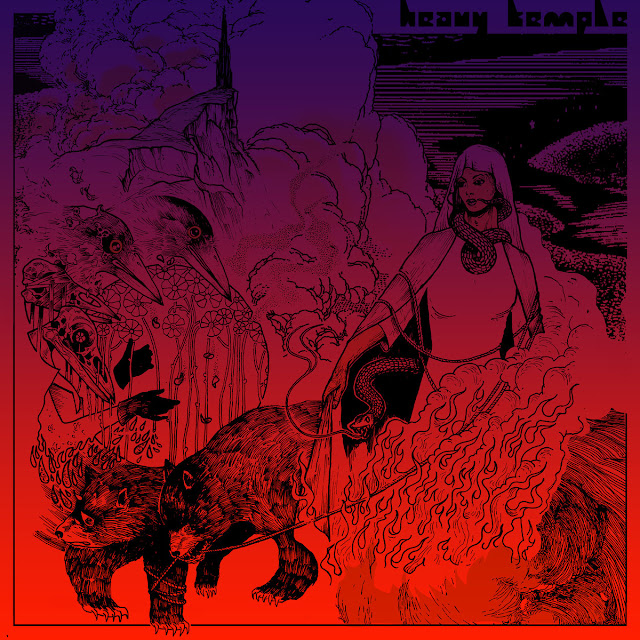 "Chassit's" first track "Keys and Bones" opens with the eerie sound of a cello, mournful and bittersweet, before segueing into an occult type doom groove driven by a pummelling drum and bass patterns, crunching fuzz drenched riffage and coated in strong powerful female vocals. The songs strong Sabbath-esque vibe then shifts into overdrive and the band finish with  an up-tempo thrash paced instrumental section that sees guitarist Barghest laying down an addictive and deeply distorted circular refrain pushed hard by the rhythm section of drum and bass.
"Ursa Machina" begins life on a wave of dissonance and droning noise before shifting into a heavily fractured and distorted doom groove over which High Priestess Nighthawk intones/chants dark arcane lyrics. The band, as they did on the previous track, then shift through the gears and take the song into hyperdrive, the trio jamming a stoner doom refrain driven by Nighthawk's gnarly bass lines and Tempestas pounding percussion over which Barghest adds touches of Iommi-esque guitar colouring.
"Pink Glass" begins with the High Priestess Nighthawk laying down a grizzly upbeat bass motif accompanied by Tempestas driving percussion the pair then joined by Barghest's fuzz drenched guitar, the three musicians together creating a tumultuous groove of stonerized doom . At around the halfway mark this groove falls away to leave a lone bass motif sporadically joined by shimmering percussion and reverb soaked guitar over which the High Priestess mournfully croons her vocals then its all change once again and the band finish back where they started closing the song on a wave of warmly fuzzed stoner doom.
"In The Court Of The Bastard King" begins by jamming a stuttering stoner/desert groove over which low pitched banshee-like vocals are powerfully delivered, the song then moves through a series of both subtle and drastic time signatures with the band mixing Sabbath-esque  heavy rock refrains with those of a more Kyuss/Unida leaning before finishing the song in blaze of swirling heavy doom tinted psych glory.
You do not have to be a Stephen King fan to appreciate "Chassit", the four songs found here more than hold their own outside of their conceptual setting, dark and doom-ish with just a hint of occult rock colouring "Chassit" is an album that both "Dark Tower" fans and those who have never even read a book can enjoy.
Check it out .....

Posted by Desert Psychlist at 11:23