In a scene that regularly sees bands namechecking the likes of Black Sabbath and Sleep as their influences its refreshing to come across a band who cite Atomic Rooster and ZZ Top as their points of reference, and equally refreshing to then hear elements of those influences in that bands overall sound.
Scuzzy Yeti hail from Troy, New Hampshire, USA and are Chris Wells-vocals, Josh Turnbull-drums,  Jason Lawrence-guitars, Brad Decatur-guitars and Wayne Munson-bass, and formed in 2014. Hard rock  and stoner fuzz, delivered with a crunchy late 70's groove, is Scuzzy Yeti's weapon of a choice, a weapon you can hear the band wielding over the five songs that make up their debut self titled EP "Scuzzy Yeti". 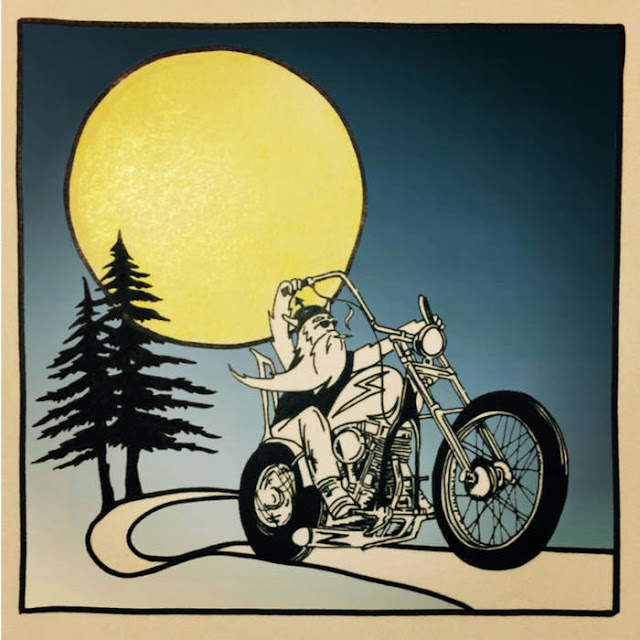 First track "Westward" is introduced with subtle guitar tones creating a laid back lysergic groove that is then joined by the voice of Chris Wells  his  powerful classic rock tones, tinted with a  hint of south western drawl, crooning an aching blues lament. Guitars and voice are then joined by the bass and drums and the songs groove shifts into heavier stoner/hard rock territory. Around Wells excellent vocal output guitarists Lawrence and Decatur lay down blues tinged refrains enhanced with bottleneck slides and tasty hooks over a pounding rhythmic backdrop expertly supplied by Turnbull's drums and Manson's bass.
"BTK" jams a groove that would not of sounded out of place back in the early 70's when rock was dragging itself out of the blues into something a little harder. Turnbull's drums open the song and are then joined by the rest of the band in a groove that can only be described as "retro" yet still manages to remain very much of today. Boasting a superb Wells vocal melody and packed with gnarly riffage and scorching solo's it's a song that kicks ass on every level.
"Conqueror" follows and sees the band channelling the spirits of Deep Purple and Uriah Heep into their grooves, albeit minus the keyboards. Part progressive rock, part traditional metal with a touches of stoner grit thrown in for good measure the song is nothing if not CLASSIC ROCK!
"Knees In The Breeze", a "Born To Be Wild" for the 00's , built around an addictive circular guitar riff , is a paean to the joys of two wheel travelling and one of those songs that just jumps out at you demanding your attention, to say this rocks would be an understatement. File under "Biker Anthem".
"Flare" brings things to a conclusion on a massive wave of heavy stoner/psych that perfectly works both as a song and as a showcase for each members contributions to the bands sound as a whole. Guitars go toe to toe over a backdrop of big booming bass and tumultuous percussion while Wells vocals coat everything in big bluesy rock tones.
Retro-rock, proto-metal call it what you like, it doesn't really matter what tag you want to pin on "Scuzzy Yeti" good music is good music and this is good music.
Check it out ......

Posted by Desert Psychlist at 15:17