Italy has, over the years, built a solid reputation within the subterranean music scene for turning out exciting and innovative doom music often influenced by Italy's horror movie genre,  not so much however is spoken about the countries hard rock, stoner/desert scene.
Soda Yells are here to redress that balance, the five piece band from Cagliari,, consisting of  Claudio Murru - Guitar, voice, Paolo Angelo Loi - Bass, Mauro Spanu - Drums, Stefano Pisano - Guitar, synth, Lap Steel and Matteo Urru - Keyboard, synth, play a quirky mix of blustering hard rock and sandy desert grooves heavily influenced by the likes of QOTSA and Kyuss, all of which can be heard on the bands debut release "Soda Yells EP" 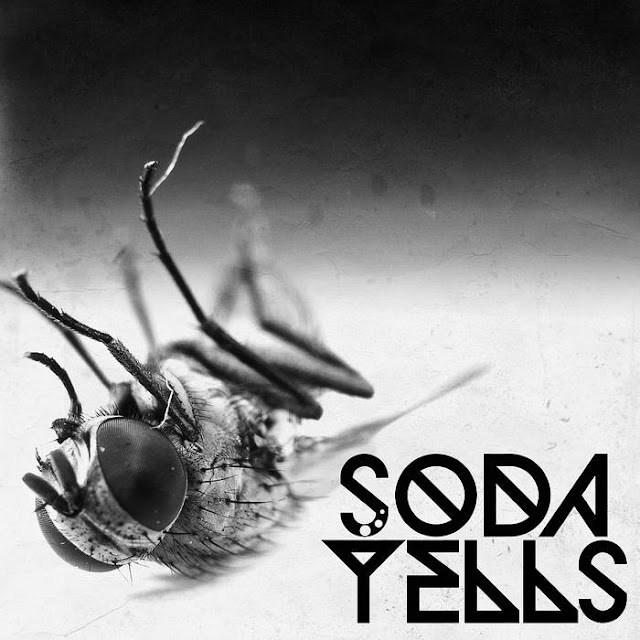 First track "Pocos, locus y Malunidos" an instrumental, opens with a lone fractured, deeply distorted guitar motif that is then joined by the rest of the band in a bluesy desert refrain injected with touches of curly guitar lick dressing. Short, sharp but totally delicious it leads almost immediately into the next track.....
"Desert On The Sun" begins all Arabic and mystical then segues into a series of dusty desert grooves replete with keyboard and synth colouring underpinned by stuttering rhythmic drum and bass patterns over which fuzz drenched guitars and clean slightly indie/new wave-ish vocals are laid.
"16:9" jams a diverse groove that journey's through a series of differing soundscapes crossing genres as it goes, one minute touching base with the kind of country and western played on old spaghetti cowboy movies, the next toying with grooves usually reserved for those bands of the British indie movement. Eclectic and quirky the song has a QOTSA meets Artic Momkeys feel that is disarming yet quite intriguing.
"You've Got Gasoline In Your Throat" sees Soda Yell hitting a slightly more "traditional" desert groove with the band swapping back and forth between two time signatures, over which clean distinctive vocals are sung  and around which the drums and bass deliver another stuttering rhythmic tour-de force, before finishing, grand style, with guitars wailing in a blaze of hard rocking glory.
"Black Rubber Baloons" brings the EP to a finish with another slice of hard rocking, sand blasted quirky desert groove which again employs the bands signature of shifting seamlessly through tempo's and dynamics before fading to the close on a wave of gently tranquil classical feeling keyboard texturing.
Italians seem to like to do things a bit differently when it comes to underground rock music and Soda Yells EP's mix of stoner fuzz and hard rock blended with British "indie" colouring is just that "different"
Check it out .....

Posted by Desert Psychlist at 05:07