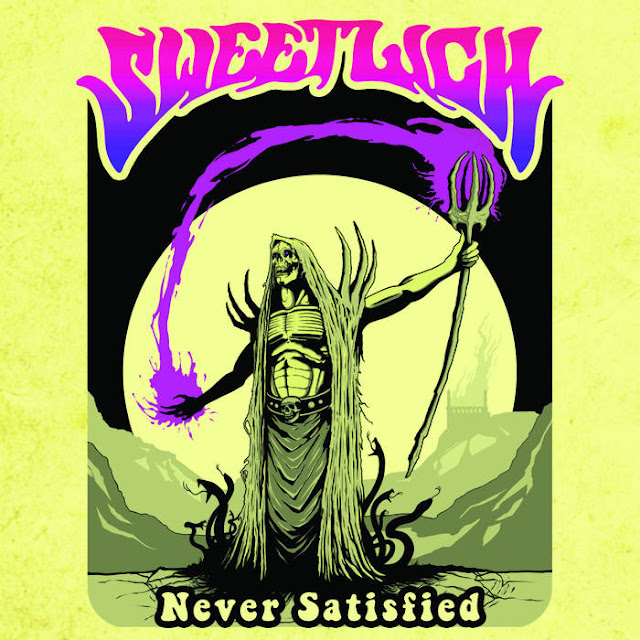 If you were in England in the late 70's you would have found it hard not to spot among the armies of spikey haired, safety pin wearing punks the occasional long haired denim clad youth with Iron Maiden or Judas Priest emblazoned across his back, The British New Wave of British Heavy Metal grew up alongside that of the punk movement and apart from the differing dress codes and hair styles both movements managed to co-exist side by side quite amicably.
Sweden's Sweet Lich recreate those heady days of galloping bass lines and twin guitar harmonies but bring them up to date by sprinkling them with a little stoner grittiness, and even a hint of punk-ish attitude. The bands new album "Never Satisfied" blends early Maiden-esque metal grooves with the hard rock bluster of fellow Swedes Graveyard, Witchcraft etc. but dispenses with those bands penchant for bluesy swagger and instead opts for a more traditional metal direction. Vocals are delivered with sneeringly maniacal glee over backdrops of driving hard metal leaning nearer to early Iron Maiden front man Paul Di'anno's  throaty howl. than  Bruce Dickenson's later air raid siren style,  music and vocals combining to give the band's sound a rawer, grittier "stoner" edge.
Sweet Lich serve up an album that boasts a plethora of seriously good tunes, with "Aim", "Never Satisfied" and "Fight" standing out for Desert Psychlist, but i'm sure listeners will have no problem in finding their own personal favourites among the eight songs that make up "Never Satisfied"
Check it out ....

Posted by Desert Psychlist at 11:56