As their Bandcamp page blurb would have us believe Ordos, Emil (vocals), André (guitar), Gustav (guitar), Martin (bass) and Max (drums), from  Uppsala, Sweden, were born out of the demise of another band. If this is indeed true then the fates must take a well deserved bow as the resulting mix of heavy stoner doom, black-ish metal and brutal Swedish groove that can be heard on the bands second full length album "House of the Dead" (Moving Air Music)  is truly something to savour and be thankful for. 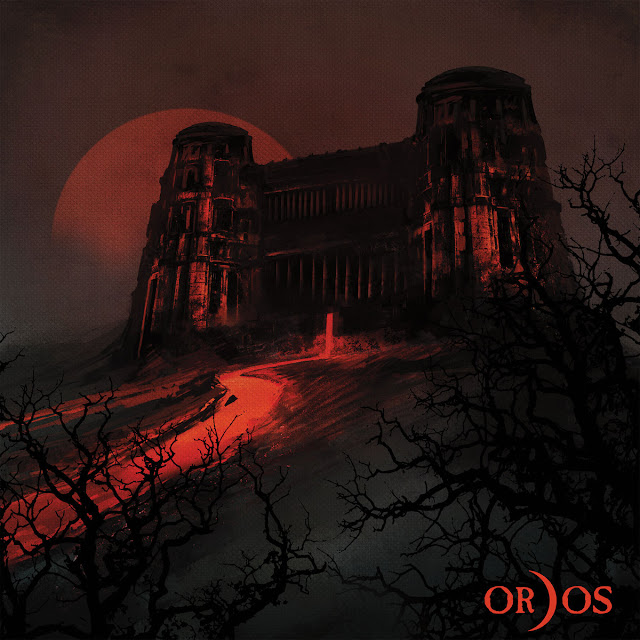 "The Infernal God" begins our journey around the "House of the Dead" with a stuttering circular single  guitar riff that is then joined by the drums, the two instruments playing off of each other before being joined by the rest of the band in a tumultuous eruption of  doomy groove populated by gnarly bass lines, thundering drums, soaring and crunching guitars and a mix of vocal stylings that stretch from malignant black metal chanting to harsh but clear sludge-like bellowed roaring and touching all bases in-between.
Title track "House of the Dead" is up next and bursts from the speakers on a heavily fuzzed uptempo stoner metal refrain before breaking down into an almost traditional doom groove with a gothic styled vocal melody sang over a mandolin-ish sounding guitar effect. The band then move the song seamlessly back into the songs initial groove with the vocal shifting into a mix of sludge- like throaty bellowing and clean but gritty stoner roaring, the songs lyrics welcoming the listener into what can only be described as a doomier twist on The Eagles "Hotel California" intoning the legend "Welcome to the House of the Dead, once your here... never leave again".
"Satan Venit" is the perfect vehicle for Ordos' new manifesto for taking their music into the darker realms and recesses and sees the band jamming crunchy circular guitar riffage over a pummelling backdrop of thunderous bass and drum rhythms.  The songs strong "blackish", fuzz heavy, stoner doom groove is interspersed with smoking hot guitar solos and coated in an mixture of vocal stylings that range from guttural to harsh  yet remain clear and intelligible throughout.
"II" finds Ordos discovering their mojo and hitting a doomy blues groove that boasts big powerful gritty but clean torch-like vocals soaring over swathes of heavily fuzzed guitars and powerful driving rhythms, the resulting groove coming across at times like a black metal Graveyard.
"Hounds of Hell" channels a little swirling Hawkwind-ish colouring beneath a grindingly heavy and totally addictive revolving guitar riff underpinned by gargantuan bass lines and tumultuous drumming. Vocals are mostly clean with the occasional sludgey roar thrown in for good measure and perfectly compliment the humongous heavy grooves laid beneath them, vocals and music coming together to create a raucous yet perfectly balanced whole.
"The Witch"  sees Ordos blending sub-genres with traditional doom grooves sitting side by side with those of its stoner cousin, the songs groove swinging back and forth between these two dynamics throughout. Gothic tinted vocal tones trade places with throaty bellows and Gregorian-type harmonies over a mixture of arpeggios,solo's and riffage from the two guitarists while beneath it all the bassist and drummer hold it all together like glue. Atmospheric and heavy in equal measure the song is a fitting finale to what is a very fine album. 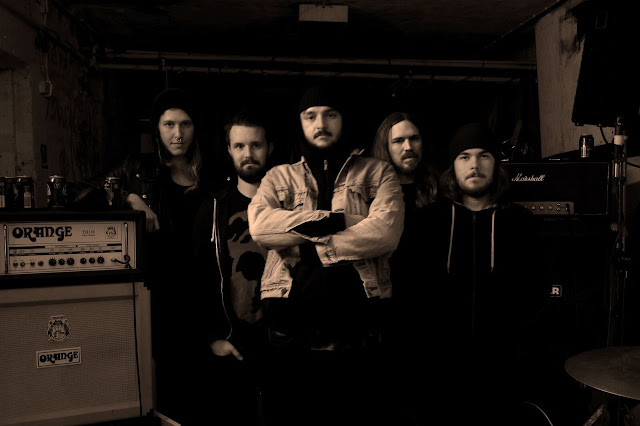 "House of the Dead" sees Ordos moving on from the traditional stoner doom grooves that were the hallmark of their debut album "Ordos" by adding a darker and at times "blacker" edge  to their sound both musically and vocally, balancing an underlying brutality with touches of gentleness and beauty and finding a musical path that incorporates both
Check it out ....

Posted by Desert Psychlist at 03:05