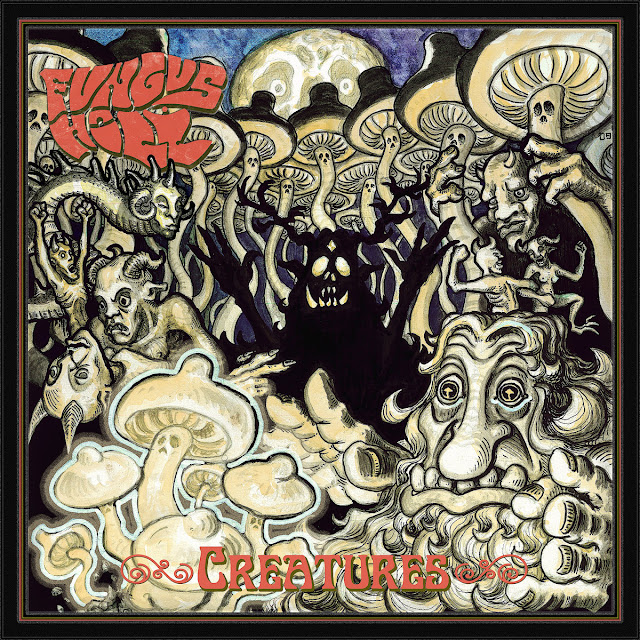 First track "Are You Dead" mixes snippets of recorded narrative with funky rhythmic desert grooves to create a trippy lysergic vibe that is further enhanced by sweetly delivered guitar colouring and superbly executed vocal melodies. "Beware Of Evil In The Sky" jams a groove that musically has its roots firmly planted in the classic rock of the 1970's  but lyrically has its head in the acid haziness of the late 1960's while "Evolution" sees Fungus Hill flexing their jazz chops in a song that just oozes class and one that sees Isaksson stepping up front and centre to handle the lead vocal duties, her sultry, smokey blues tones delivered Piaf-like over a backdrop of jazzy fusion grooves. Final track "Creatures" has the band hitting a  chugging  stoner groove into which they throw everything but the kitchen sink, catchy sing-a-along melodies swooping guitar solos', head noddingly incessant rhythms are delivered  with a joie-de vivre and exuberance that is breathtakingly refreshing.
Fungus Hill describe what they do as "psychedelic stoner rock" but when listening, to the four tracks that make up, the bands debut "Creatures", a better description  may be "stonerized psych rock" as the lysergic elements of the bands sound far outweigh those of the stoner rock ones.
Check 'em out .....

Posted by Desert Psychlist at 12:57