Greek riffmeisters Dope Default tweaked a few ears back in August 2015 when the Thessaloniki based band released their debut EP "Nuclear Honeymoon" an eclectic mix of hard rock crunch and grunge tinted stoner fuzz,.Fast forward a year and a few months and with a subtle change in musical direction Dope Default return with a brand new EP " Tales From The Wasteland". 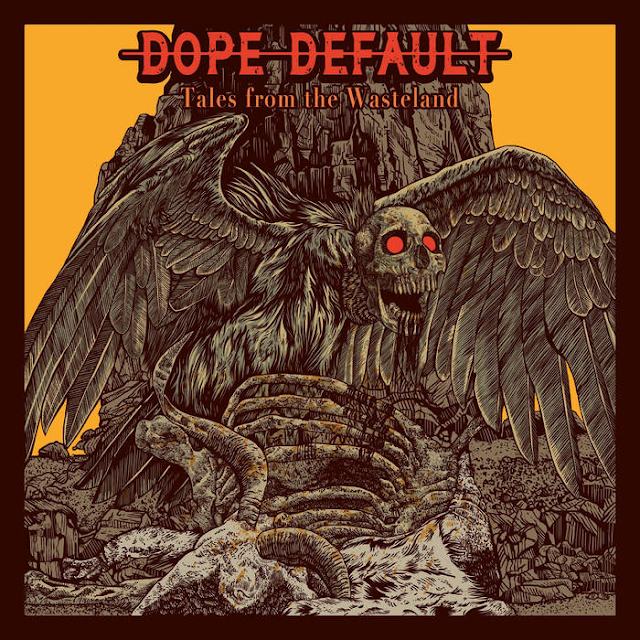 Where "Nuclear Honeymoon" traded on Dope Default's love of Seattle flavoured alt/grunge and saw the band jamming grooves of  quiet, loud. quiet dynamics interspersed with desert fuzz, "Tales From The Wasteland" attacks from completely the opposite direction. The Alice In Chains/Stone Temple Pilots like grooves the band employed on their debut EP are still very much in evidence but are this time given a back seat with the stoner/desert fuzz of the bands other influences, Monster Magnet, QOTSA and Planet Zeus, taking over the driving seat. From the opening bars of first track "Atonement" it is fairly obvious the bands shift towards the harder, grittier end of underground rock spectrum is one that suits them perfectly and one that the band seem to relish in. Songs like "Law of Blood" with it's chugging groove and deliciously addictive vocal melody, and "Preacher" with its heavy blues guitar solo's  and throaty vocals over heavy driving rhythms, have a significantly harder stoner edge than the bands previous output. Even when the band tread over old ground, as on the two reworked tracks from the first EP "Nuclear Honeymoon" and "Insexication", they do so with an extra helping of raucous stoner grit and dusty desert fuzz and that alone is almost enough to forgive them their shameless and, hopefully, tongue in cheek ripping-off of Monster Magnet's "Space Lord" going under the name of "Cold Train"
Greek hard/stoner rock is in a good place at the moment with bands like Planet of Zeus and 1000 Mods leading the way both in Europe and the Rest of the World.  Dope Default may not be in that league quite yet but if they continue releasing EP's of the quality of  "Tales From The Wasteland" then that day might not be too far away..
Check 'em out....

Posted by Desert Psychlist at 05:28