DOPELORD ~ CHILDREN OF THE HAZE ... review

Dopelord are Grzegorz Pawłowski (guitar), Piotr Zin (bass/vocals), Paweł Mioduchowski (guitar/vocals) and Tomasz Walczak (drums), four guys from Poland who in their own words like to " tune low and play slow."
The band were formed in Lublin. Poland back in 2010.. releasing their first album "Magick Rites" in 2012 following this up in 2014 with Black Arts, Riff Worship & Weed Cult" As seems to be the norm with Dopelord the band have again allowed a roughly two year gap before releasing this their latest opus "Children Of The Haze". 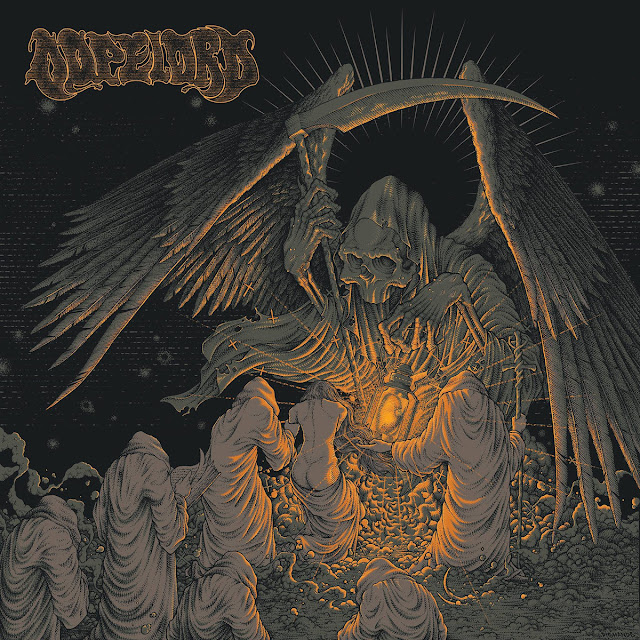 Dopelord have with "Children Of The Haze" found a way to combine the doom laden heaviness of their previous albums with a newly acquired  element of subtleness and lightness of touch. This is not to say that these Polish stonernauts have mellowed or compromised their sound in anyway , the heaviness and brutality of their slow/low riffage and rhythms are still very much in evidence  throughout with songs like title track "Children Of The Haze", "Scum Priest"and  album closer "Reptile Sun" really pushing those elements of the bands sound to the fore. It is however on songs like the slow burning and atmospheric "Navigator" and the brief but totally mesmerising "Skulls and Candles" that the band really start to show their evolvement as songwriters and arrangers adding into both the music and the vocals elements of harmony and melody. On penultimate track "Dead Inside (I&II)" the band even combine these elements with a touch of bluesy torch like swagger, pouring scorching hot guitar solo's over a pounding backdrop of heavy riff''n'rhythm coated in superbly delivered clean vocals.
"Children Of The Haze" is Dopelord's third album and in Desert Psychlist's opinion their best so far and is one that sees the band subtly shifting their sound into new and exciting musical spaces and territories yet remaining true to their heavy riff fuelled stoner doom roots.
Check it out .....

Posted by Desert Psychlist at 06:10