Dead Otter hail from Glasgow, Scotland and are Scott Falconer (drums), Gav Riddell (bass), John Riddell (guitar/vocals) and Omar Aborida (guitar), four guys with a penchant for playing fuzzy stoner grooves enhanced by large elements of psychedelic colouring and proggish complexity all of which can be found on their brand new EP "Pathfinder". 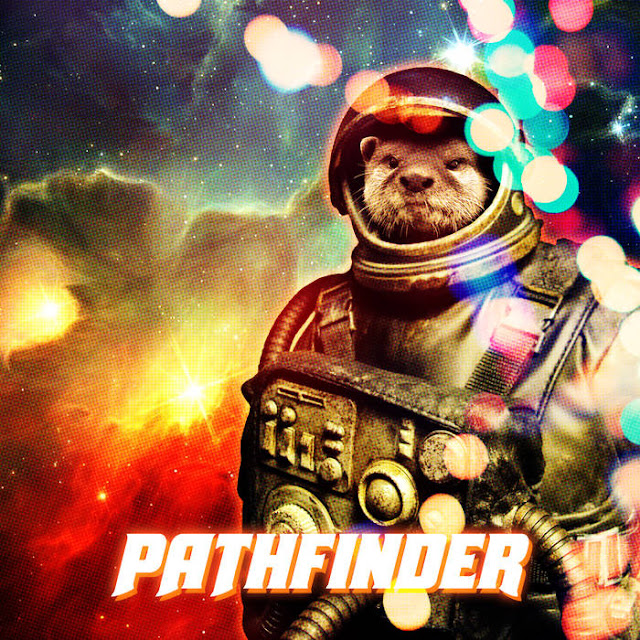 The appropriately titled "Stoner Devil" opens "Pathfinder" with the band jamming a heavy dark doom-ish instrumental groove before fragmenting that groove with touches of prog -ish metal colouring and then spinning things in a completely different direction by going off into a heavy stoner blues jam overlaid with searing guitar pyrotechnics. "Open My Eyes...seen enough now" follows and continues the journeys into lysergic blues territory that informed the last half of the previous track but this time at a more sedate tempo and with the addition of vocals. John Riddell's vocals are clean, slightly hazy and sit perfectly within the psychedelic tinted grooves surrounding them. his voice sitting a little back in the mix allowing his guitar and that of his six-string partner, Aborida, to be the focus of attention, the two trading off solo's, licks and riffs over Gav Riddell's big funky bass lines and Falconer's dexterous percussion. "The Whangy" is another flight of instrumental fancy that once again sees the two guitarist up front and centre laying down swathes of fretboard fury around the differing foundations of rhythmic groove laid down by Falconer and G. Riddell. Title track "Pathfinder", another instrumental, brings the EP to a conclusion on a wave eastern  themed motifs wrapped around a core of desert rock rhythms that slowly shifts through the gears building in intensity and depth and that during its journey touches on elements of bluesy psych and swaggering spacey hard rock before ending in a swirling dark sustained effect.
If your a devotee of heavily psyched blues and your partial to swirling, swooping guitar interplay then Dead Otter have released an EP you just have to check out ......

Posted by Desert Psychlist at 13:27