In 2011, Washington DC stonernauts Borracho released their debut album "Splitting Sky" a kick-ass album packed solid with fuzzy stoner rock grooves laced with scorching guitar solos, massive bass lines, gnarly vocals and thunderous percussion. The underground rock music scene, almost as one, immediately fell under the bands spell with journalists, bloggers and podcasters eager to heap praise upon their t-shirt clad shoulders. The band followed this up with "Oculus"(2013) and once again the undergrounds movers and shakers were all over it with one reviewer calling it "essential" and another "super addictive". Now three years later and after a couple of moderately well received split EP's,with Eggnog and Cortez and three songs on Ripple Music's "The Second Coming of Heavy: Chapter One"  the band are on the cusp of releasing their third full length album "Atacama"(2nd December 2016). 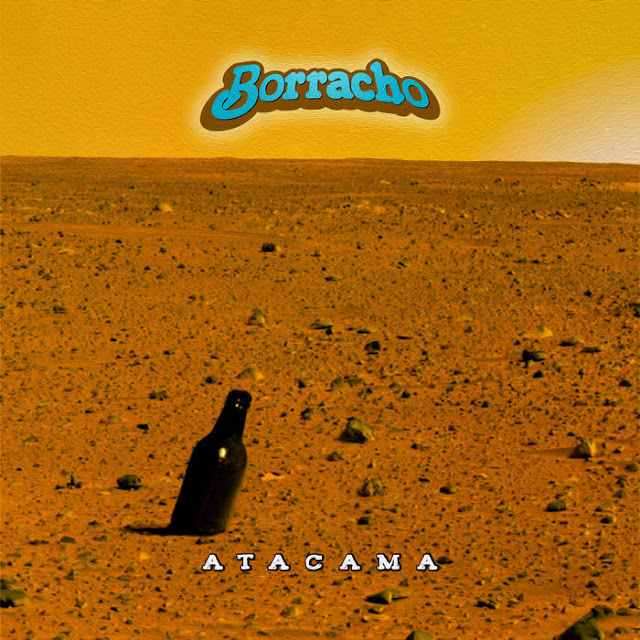 Any thoughts Borracho may be going through the notorious "difficult third album" syndrome are quickly dispelled when the blues tinted, fuzz drenched grooves of first track "Gold From Sand" come roaring like a steam train out of the speakers. Gritty whiskey soaked vocals roared over hard edged riffage supported by thunderous drumming, pummel the listener with the sheer ferocity of their deliverance. "Overload" follows, at over ten minutes it's the longest track on the album , and sees the band injecting into their gnarly mix of bluesy hard rock and dusty desert grooves, brief snatches of lysergic colouring, "Lost In Time" struts its stuff with a southern stoner swagger and ends in a wash of  feedback and noise that segues immediately into "Descent" an atmospheric doom laden instrumental replete with howling guitar solos, thundering bass, big, big drums and tolling bell. "Drifted Away From The Sun" begin with an array of effects backed by sympathetic percussion and is then joined by a liquid loose bass line and echo laden guitar arpeggios. This laid back and loose groove sits beneath the songs low mellow sung verses, moving to a harder stoner refrain in the songs catchy chorus with the vocal following suite, a refrain that is reprised for the songs final quarter and takes things to the close on a wave of gritty stoner groove. "Flower" is next up and sees Borracho showing glimpses of  their softer side with clean toned arpeggios and strings trading off with big fuzzed out riffage in a charming but slightly schizophrenic instrumental. Things return to normal with "Shot Down, Banged Up, Fade Away" an absolute belter of a track laced with gnarly heavily fuzzed guitar and bass riffage underpinned by massive pounding drums and coated in distinctive throaty vocals with a groove so grin inducing it should be on prescription. Borracho bring proceedings to a close with a delightful acoustic based "farewell/end times" song dominated by big sentimental and melancholic vocals conveniently titled "Last Song".

Have Borracho managed to avoid the curse of the "difficult third album"?...You betch'a "Atacama" is their best yet!
Check it out ...

Posted by Desert Psychlist at 03:57