Always pleasing when a new UK band appears on the "underground" rock scene especially when said band serve up the sort of kick-ass mix of hard rock and stoner/sludge that, London, based Purple Kong do on their self titled debut EP "Purple Kong" 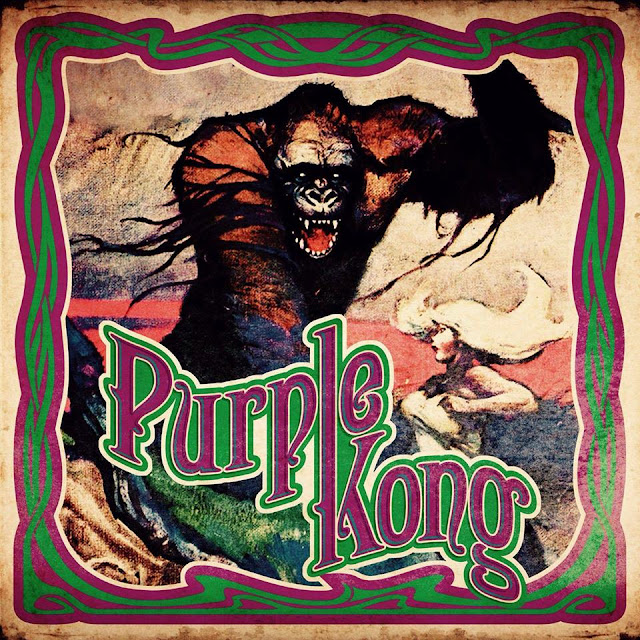 Only three tracks long but with more power and grit than some bands pack into ten "Purple Kong" is an EP that demands attention and is one that promises much for the future,
First track "Village On Fire" begins with a thundering storm soundbyte that then segues into an even more thunderous heavy doom/sludge groove populated by deeply, and we are talking extremely deeply, distorted bass and titanic drumming over which howling guitar and powerful, cleanly delivered vocals are laid. Heavy as a truck load of hippo's wearing lead boots the track pins the listener to the wall with its sheer force and swaggering intensity.
"Cocaine Pentagram" begins with another movie sounbyte before screeching feedback leads into a rolling guitar riff  that is then joined by the bass and drums. This time the band hit a groove more akin to the proto-metal of the early to mid 70's ,albeit a lot harder and heavier, built around the recurring vocal mantra of  the songs title. As the song approaches its nadir the song moves into jam territory with scorching wah drenched guitar quacking and squawking over a wall of tumultuous rhythm .
"Getting Away With Murder" brings things to a close with a track that sees Purple Kong blending the sludgey riffage of the first track with the proto- metal leanings of the second. Vocals are pitched a little lower here giving the song a slightly classic/hard rock feel in places. Around the three quarters mark the song suddenly drops down a gear and moves into a drone -like groove with heavily effected vocals before exploding back into its Montrose-like initial refrain and then fading on a sustained and droning guitar note.
Like a whirlwind, "Purple Kong" is an EP that picks the listener up spinning him/her around until finally placing him/her down battered, disorientated, miles from the starting point but grateful for the ride.
Check it out .....
Posted by Desert Psychlist at 16:21