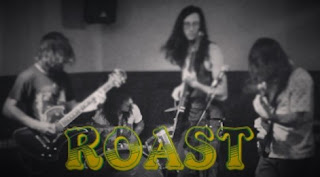 It's always good to hear from old friends especially when those old friends are armed with exciting new music for you to hear. Tsweat Tyler Dingvall, vocalist with, San Diego riffmeisters, The Great Electric Quest recently got in touch with Desert Psychlist and was literally salivating over a new band he was planning to sign to the bands new label Glory Or Death Records, a quartet. going by the name of Roast.
Roast, originally from New Jersey and now working out of Los Angeles, are Connor Barrett (bass), Bill O'Niell (drums), Jon Bolino ( guitar/vocals), and Nico Magalhaes (guitar), four guys whose influences run the gamut of rock history from Hendrix to Motorhead and beyond, influences that colour but do not dictate the four tracks of the bands soon to be released debut EP "Roast"( Glory Or Death Records recorded and mixed by James Page at Emerald Age Studio) 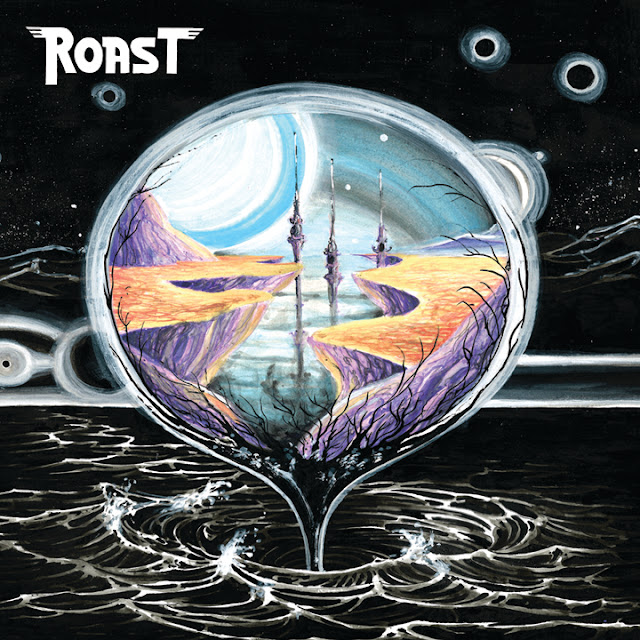 First track "Leave Me Free" opens with a deliciously liquid smooth bass intro from Connor Barrett with the rest of the band laying down a jazzy fusion groove beneath him before the hammer goes down and the whole band segue into a crunchy hard rock groove bathed in warmly fuzzed guitar riffage and underpinned with hard driving rhythm.Bolino, swaps riffs and solo's with the excellent Magalhaes and also delivers vocals that are clean, powerful and perfectly matched to the retro grooves and rhythms Barrett and O'Neill lay beneath them.  The first thing that hits you is the authentic early 70's groove the band achieve, a groove that recalls the days when bands like Sir Lord Baltimore, Truth and Janey and Australia's Buffalo were making that transition from heavy psychedelic blues based hard rock to the harder, heavier metal of the 80's, a sound that some now call proto-metal.
Next up is "Serpent" a song that sits somewhere between the heavy blues of Led Zeppelin and the early doom of Birmingham's Black Sabbath, a place Welsh hard rockers Budgie used to call home.
O'Niell and Barrett combine to lay down a massive rhythmic platform for the two guitarists to launch their riffs and solo's from, the pair mixing it up between seering blues licks and dirty Iommi-like powerchords over which Bolino delivers a mix of Ozzy/Burke Shelley -like vocal tones.
"Gypsy Trip" takes the long route and sees the band jamming a twelve minutes plus mix of heavy psych and stoner/hard rock sprinkled with moments of early prog-like complexity and experimental psychedelic structuring. Magalhaes and Bolino channel the spirits of lesser known guitar duo's through their harmonic interplay bringing to Desert Psychlist's mind the fretboard trade offs of the late Micky Jones and Deke Leonard (Man) and Wishbone Ash's Andy Powell and Ted Turner. Special mention should go here to the drum chops of Bill O'Neill, the man swaps between heavy pounding bluster and gentle shimmering intricacy with incredible ease and skill, never missing a beat.
"Heavy Toll" brings things to a close, the songs initial dual guitar refrain comes on like The Allman Brothers on amphetamines before shifting down a gear into a fuzz drenched stoner groove. Heavy, in the old sense of the word, and with a great vocal and a wickedly addictive groove it closes the album the way it started with a BANG! 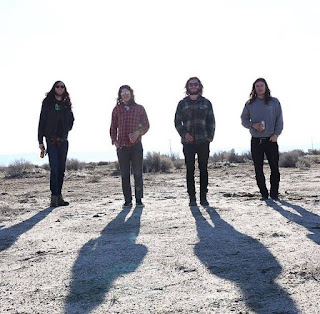