Stratus Nimbus are the brainchild of Arizonian brothers Doug and Dan Dowd who together with a loose collective of friends and associates have just released their first full length album "Stratus Nimbus" on Stone Groove Records. 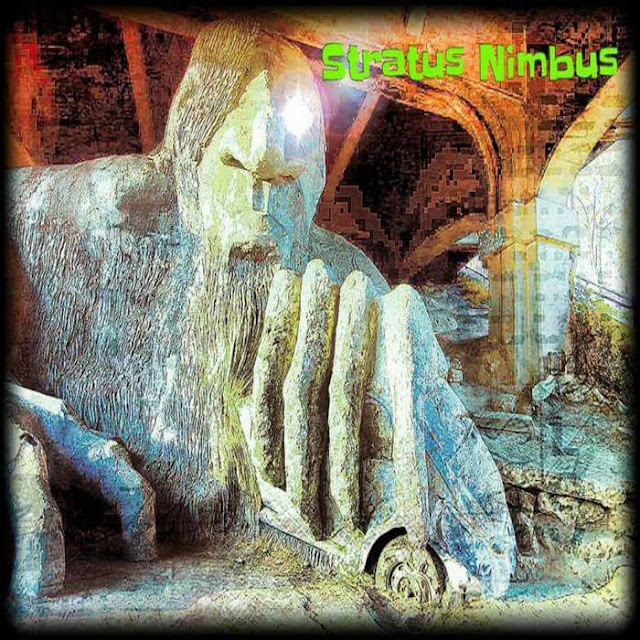 The album break down of musical contributions is quite complicated with Doug Dowd handling the drums and vocals on tracks 1 & 6 and brother Dan holding down rhythm guitar on tracks 1,2,4,5 & 6 and lead on tracks 1 & 4 with the rest of the contributions going like this.. Tom Goddard: lead guitar (tracks 2 & 5), Fabrizio Monni: rhythm guitar (track 3), Colin Ragan: lead guitar (tracks 3 & 6), Tom Davies: bass (tracks 1, 2, 3, 5 & 6) and Luke "Canada" Shelley: bass (track 4) Chris BusKirk: vocals (tracks 2, 4 & 5) and Linda Rydelius of Baronen and Satan guesting on track 3.. With such a mix and match collection of musicians one might expect "Stratus Nimbus" to be a slightly disjointed affair but in fact the diversity of musical approaches within each song actually works in the bands favour.
"Equality" opens the album, its heavily phased riff sitting atop a strident desert groove creating a spacey Hawkwind like vibe over which Doug Dowd weaves equally heavily phased clean vocals . "Can't Break Free" and "A Walk In The Dark" muddies the waters somewhat by adding elements of doom and heavy psych into proceedings with the latter also sprinkling healthy doses of bluesy guitar colouring into the mix. "Galaxy Girl" ramps up the psych and has an almost 60's style vocal melody, albeit a heavily treated one, and leads into the dark swirling stoner/psych "You Take" a diatribe on a complicated relationship with very dark lyrical content. "Rain Jam" closes the album with a delightfully spacey, psych drenched groovathon sprinkled with Fu Manchu/Nebula type skate punk/garage vocals.
If your a fan of heavy psych who likes their grooves swathed in warm fuzz and distortion and have a penchant for phased, hazy vocals then you've just found your next favourite band.
Check 'em out

Posted by Desert Psychlist at 18:12