Well we all knew it would not be long before the pages of Desert Psychlist was once again featuring a band from the land of Vikings, saunas and fuzz drenched guitars, quality Swedish "underground" rock just seems to be one of life's constants.
Moon Coven are a five piece band with  a penchant for down tuned heavy riffage who hail from Malmo and Stocholm,Sweden and are a band untypical of the usual blues based Swedish stoner groups that seem to appear every other week, in that they come at the genre from a more doom/heavy metal angle, as can be witnessed on the bands full length, self-tiled debut "Moon Coven". 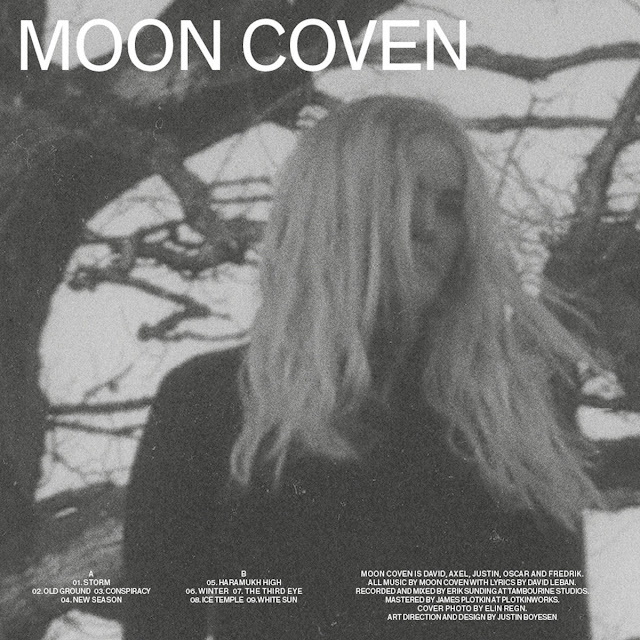 "Storm", the albums first track, begins with drones, tinkling bells and reverb soaked arpeggios before bursting, like an alien from John Hurt's chest, into a titanic stonerized doom refrain coated in Gregorian-like vocals supported by thunderous drumming and titanic spine crumbling bass, all combining to create a sound that is as atmospheric as it is heavy and thereby setting the tone for the rest of the album."Old Ground" rears its gnarly head next and wastes no time in getting down and dirty by exploding straight off of the starting blocks into a monumental mid tempo. head noddingly addictive groove replete with scorching solo's and superbly haunting vocals."Conspiracy" and "New Season" see the vocals shift from the monk-like chanting's of the previous tracks to a slightly more "shoegaze" delivery with a more melodic meter albeit still wrapped around those Sleep/Spelljammer-like grooves the band have made their home, and with the former containing a two guitar trade off that is just sublime. "Haramukh High" sees Moon Coven return to the vocal deliveries of the first two tracks but this time around a slower more doom orientated groove.while "Winter" has the band almost, but not quite, moving into  more occult rock territory. "The Third Eye" comes as quite a surprise after all that has gone before it's softer, laid back groove enhanced by mellow vocals and chiming guitars is probably the nearest Moon Coven will ever get to a ballad. "The Ice Temple"is an atmospheric noise piece that is so short (one minute forty seconds) it hardly seems to register before we are into the doomy depths of closer "White Sun", a blazing return to heavy-assed riffage, pounding percussion and ethereal vocals that concludes on a wave of droning sustain.
Heavy, dripping with atmosphere and boasting an excellent and quite unique vocal approach Moon Coven are a band you should most definitely check out .....

Posted by Desert Psychlist at 09:16