The name,The Blue Sunshine Family Band, conjures up a picture of heavily bearded guys in brightly coloured kaftans wearing beads and bandanas incorporating native instrumentation into folky psychedelic grooves. The truth however is that TBSFB are a bunch of t-shirt wearing stoners with an alarming lack of facial hair who play gnarly instrumental jams with a large Sabbathian bias, some of which can be heard on the bands debut album "The Blue Sunshine Band" 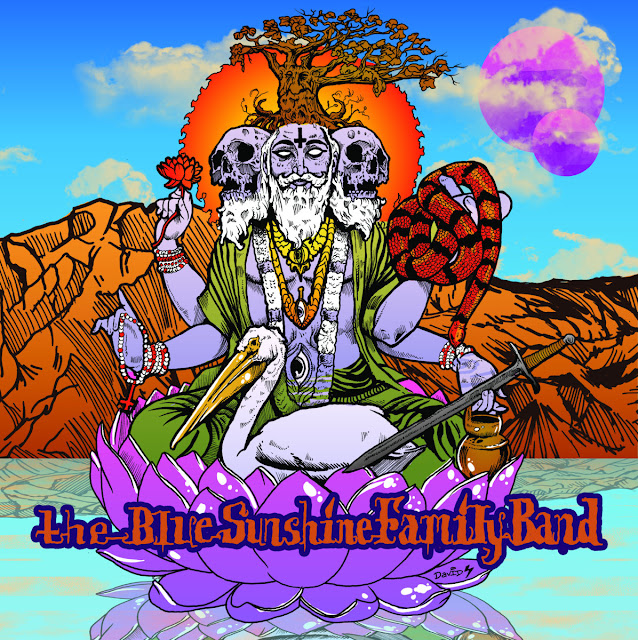 "The Blue Sunshine Family Band" is more of an extended jam than an album of individual songs, albeit a jam that is broken up into six movements denoted by Roman numerals.
The albums first first three tracks "I","II"and "III" jam Iommi-esque riffage underpinned by a solid drum and bass foundation around which dark swirling guitar solo's are weaved. It has to be said that there are times when you expect an Ozzy-like vocal to suddenly appear but those moments are only fleeting and on the whole the tracks work well as instrumental pieces.
The second half of the album gets really interesting when the band start to shrug off the shackles a touch and start to really fly, and its almost as if the previous three tracks have been the intro's leading the listener by the hand to this point, preparing them for what comes next.
"IV" starts innocently enough with the guitarists laying down thick slabs of gnarly riffage over a thundering backdrop of rhythm but then there is a subtle shift with elements of heavily psyched doom starting to creep into things. The guitarists moves the song into a stuttering fragmented stoner doom riff that leaves spaces for the bassist and drummer to fill with funky bass runs and dexterous percussive fills, something they do with the utmost skill and ferocity.
"V" sees TBSFB showing off their experimental side to great effect with the two guitarist tearing from their fretboards Floydian guitar passages that flow like molten rock over and around a spacey backdrop of  laid back, but highly effective, percussion, shimmering cymbals and low liquid bass.
"VI" pulls together the two sides of the album with scintillating mix of both sides of the bands musical dynamic. Titanic bass and pounding percussion lay a foundation for the two guitarist to lay waste to everything around them with scorching guitar pyrotechnics that swoop and swirl like birds of prey over the mountains of groove beneath them and recalls, to Desert Psychlist's ears, the more out there moments of Kansa City's legendary JPT Scare Band.
It's hard to believe that."The Blue Sunshine Family Band" was recorded in one take, with no breaks but if that's what it takes to produce an album of this depth and quality then let's hope they use the same method for all their future releases.
Check 'em out.....

Posted by Desert Psychlist at 13:35