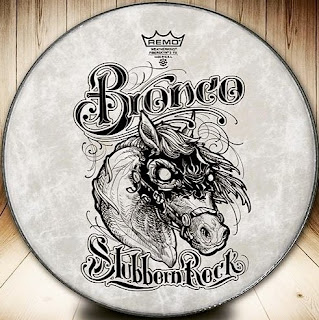 Gabrielle Bègin (vocals), Frederic Fortier (bass), Jean-Francis Gascon (guitar) and Rejean Lacroix (drums) are collectively known as Bronco, a four piece blues based band, with a foot in the stoner rock camp, hailing from the Canadian province of Quebec. Regular perusers of the stoner rock pages of Bandcamp may recall the band's 2014 release "Hell Racers" a five track EP of scorching stonerized blues that prompted Doomed and Stoned contributor, and champion of female fronted bands, Paul Rote to write "Female fronted occultish blues rock band. A good one at that!".
Two years on from "Hell Racers" and with a prestigious inclusion on Doomed and Stoned compilation " The Enchanter's Ball" inbetween the band are about to embark on a new phase in their career with the release of their first full length album "Modern Mythology". 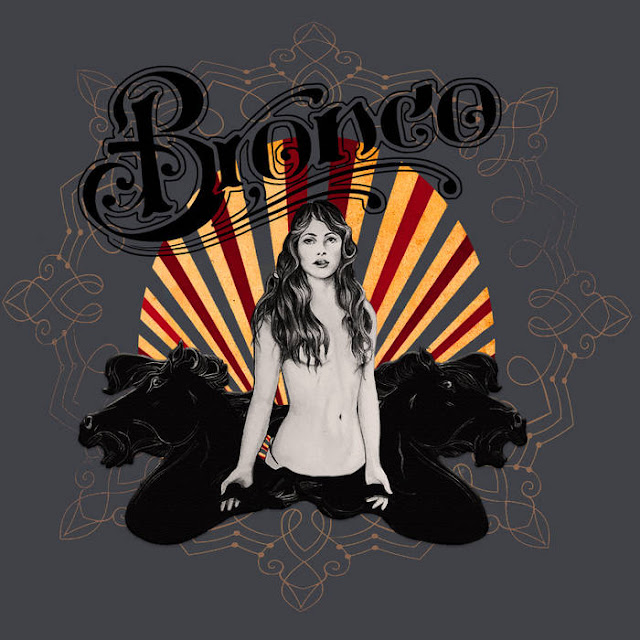 The underground rock music scene is awash with bands who incorporate the blues into their stoner hard rock grooves but Bronco come at the listener from the opposite direction by incorporating those grooves into their blues. "Modern Mythology" is essentially a blues rock album stonerized for a 00's audience with songs like "Falling Free", "Never Ending Dance" and the face melting "Starting Again" strutting and swaggering with a bluesy arrogance swathed in fuzz drenched riffage driven by thundering drum and bass and coated in strong female vocals. Things get really interesting though when the band introduce into their bluesy grooves a little occult-rock colouring  as on "122db","Hazy Lies" ,"Machine", and "The Other Side Of The Mirror". All four songs are still rooted in the blues but are infused with a mystique and edgy darkness that sees Bègins vocal taking on a sultrier edge to match the darker edged grooves the rest of the band are laying all around her.  "Invoking The Spirit", "" and "Trompe La Morte" complete the album and are both equally strong blues based songs infused with elements of hard stoner rock that will kick start the listeners dormant mojo into overdrive.
"Modern Mythology" is an album that shows the blues as a genre is not quite dead yet and is still as relevant today as it was when Robert Johnson stood at the crossroads waiting to do a deal with the devil, it just needed a little fuzz
Check it out ......

Posted by Desert Psychlist at 17:01