A lot of great sounds coming out of South America lately, the continent is throwing up a diverse and exciting mix of  "underground"grooves for us lovers of fuzz drenched riffage to wrap our  groove battered ears around. One country that is cropping up on Desert Psychlist's radar more and more is Chile, that long strip of land running between Argentina and the Pacific Ocean is churning out some seriously good bands of late one of which are Concepcion based groove meisters Kayros.
Kayros  maybe new to us in the northern hemisphere but the band, Nacho (vocals/guitar), Seba (guitar/keyboards), Pancho (bass/guitar/brass/Vietnamese harp & backing vocals) & Leo Mantis (drums/percussion), have been laying down their brand of subterranean riff''n'roll since their inception in 2006 releasing three albums "Pozo Negro"( 2009), "Tierras Infertiles 1" (2012) and "Tierras Infertiles 2" (2012), This year (2016) the band released their fourth and arguably their best album to date "Hombre de Piedra" 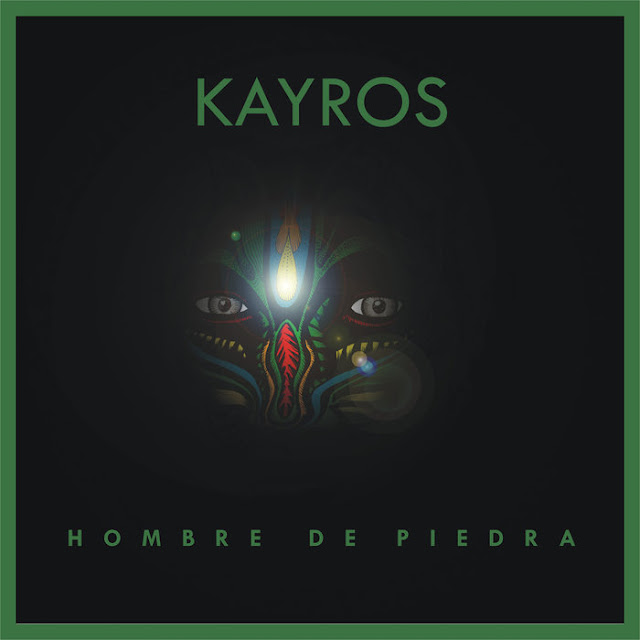 Title track " Hombre de Piedra" arrives on wave of jazz tinted fusion with brass instrumentation, heavily effect laden guitar and keyboards over a backdrop of stunningly intricate percussion, before segueing into a heavily distorted desert-like riff  over which Nacho delivers clean, strong vocals sung in his native tongue. The groove twist and turns through differing dynamics going off on a tangent into the arenas of psych and space rock then returning to its starting point before going off in another direction, something that is a constant throughout the albums eight tracks.
The rest of the album follows a similar path of spacey riff fuelled journeys into the lysergic underpinned by complex rhythmic patterns and arrays of differing effects with highlights being "Crisis RH2" with its scorching guitar solo's and pulsating liquid bass lines,"Gaza" with its stoner doom-like refrain and the excellent "Caminos Maginales" a rumbling psych doom opus that sees Nachos joined by fellow Chilean singer David Velis.
In truth there is not a bad or poor track to be found on "Hombre de Piedra",  from the excellent arrangements, the high levels of musicianship right down to the excellent production everything about this release screams quality!
Check it out .....

Posted by Desert Psychlist at 14:04