Back in 2012 Spacegoat, a four piece band from Monterrey, Mexico, released "Spacegoat EP", five tracks of delicious 70's inspired classic/hard rock grooves blended with aspects of lo-fi doom and occult rock coated in gloriously serene female vocals, an EP that garnered a lot of interest both in their Mexican homeland and that of the wider world. Unfortunately due to financial restraints and other more mundane reasons the band, Gina Ríos (Vocals & Guitar), Miguel Ríos -(Lead Guitar), Rigo Vigil -(Bass) and Rey Fraga (Drums), were unable to immediately follow up on this  interest with a full album and so the band decided to go down the "Kickstarter" route and ask the fans to help out with contributions, a move that has resulted in the release of this their debut album "Superstition". 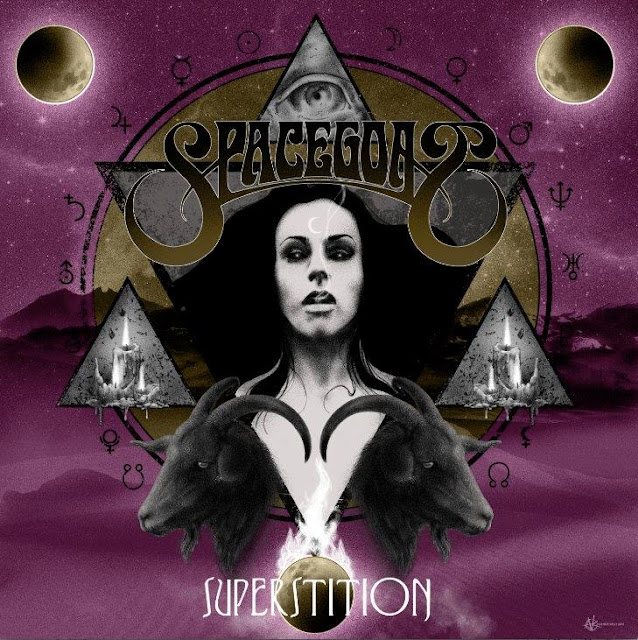 From the classic rock toned guitar riff that introduces first track " Doomensional" to the Hawkwind-esque swirling outro of final track "Sleeping Hours" the listener can be assured that every penny/euro or dollar contributed to the bands Kickstarter campaign has not been wasted or misused in the pursuit of hedonistic pleasure but has instead gone to making the best damn album possible with the funds available. Songs like the native tongued "Transmuta", title track "Superstition" and the slow bluesy "Astral" have their roots buried way down deep in the classic/hard rock of yesterday but are infused with elements of today's doom, psych and stoner giving them a fresh contemporary "now" feel. Spacegoat's sonic attack is further enhanced by rhythm guitarist and vocalist Gina Rios, her strong clean vocals soar and swoop over the molten hot grooves Vigil, Fraga and brother M. Rios lay beneath her, giving the songs, at times, an almost "symphonic" feel and on the beautifully tranquil "The Wooden Path" a folk vibe.
All in all "Superstition" is an album of well written and executed songs made by a band of extremely talented musicians who know how to blend yesterday with today to create a sound for tomorrow.
Check 'em out .....

Posted by Desert Psychlist at 02:38