Finland not only shares a border with Sweden it also shares a knack for turning out good music, especially when it comes to bands from the alternative and underground scene.
Yeti hail from Yemi, Finland and play a heady mix of stoner and doom sprinkled with folk melodies creating a sound and vibe that is quite unique as evidenced by their brand new album Ritual. 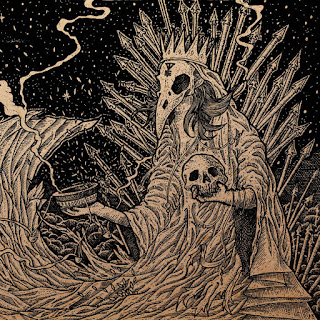 Ritual is an album that falls into that grey area between the stoner and doom genres that we now refer to as "occult" and like a lot of bands populating this niche (Purson, Jex Thoth and Blood Ceremony) Yeti are fronted by female vocals. Antti Miettunen (guitar), Mikko Rintala (bass) and Joonas Jäntti (drums) create a deliciously dense fuzz drenched barrage of noise over which the sensuous and slightly folkish tones of vocalist Kaisa Kari float and flow. Kari's voice, pitched somewhere between Blood Ceremony's Alia O'Brien and Curved Air's 70's acid/prog goddess Sonja Kristina, adds a fragile edge to Yeti's doom laden grooves that is both delightful and refreshing. 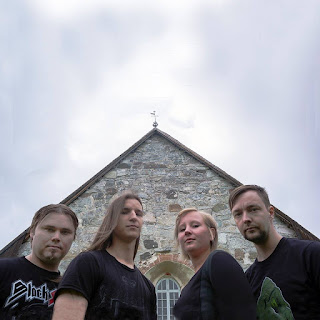 Yeti are no one trick ponies though and over the course of the six songs that make up Ritual the band cover all bases, "Fools Hope", "Inferno", "Forsaken" and "Soloman" lay down the doom with varying degrees of dynamics and pace, dirty riffs, scorching solos and dark edgy rhythms all topped with Kari's creamy vocal tones. "She" brings in a whole new vibe to the proceedings, mellow  and with an almost medieval folk groove its gentle use of acoustics and what sounds like a fairground barrel organ combined with Kari's sometimes sung, sometimes spoken vocal creates a groove that is as sinister as it is beautiful. The final song, and the one that gives the album its name "Ritual" is nine minutes and twenty seven seconds of glorious OTT psych doom in which Kari wails her vocal banshee like over a dark swirling circular riff that only lets up when Miettunen  rips into his guitar to produce an absolute face melting solo. Brillantly executed, menacingly dark, the song ends the album on a wonderfully high note and shows why you, the reader should check these guys out!
Posted by Desert Psychlist at 16:03