Disenchanter first blew my mind (and my speakers) when, following a recommendation from a friend, I heard 2013 EP "Back To Earth". It was a wonderful debut full to the brim with strong vocals, song writing and powerful musicianship, not content to rest on their laurels they repeated this feat again a few months later with 2014's "On Through Portals". Both EP's were, and still are, stunning examples of stoner/alternative rock shot through with elements of doom and psych, full of hooks and catches that had appeal to both stoners and more traditional metal listeners.
Since the release of "On Through Portals" the band have been  tirelessly honing their chops on the live circuit and, when time permitted, writing new songs all of which has culminated in the release of this their first full length album "Strange Creations" 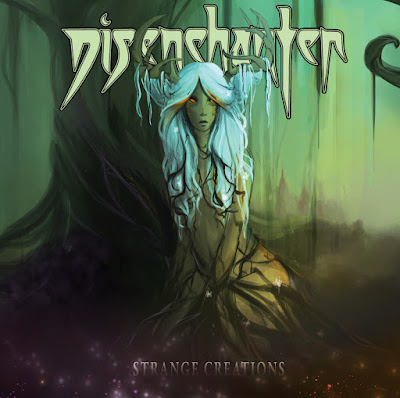 The opening drum and  guitar intro that opens first track "792" sets things up nicely for the entrance of Sabine Stangenberg's vocal, powerful, dark and pitched with a slightly epic tone and delivery she weaves a magical spell over the listener as she sings of foreign lands and blackened souls. Stangenberg is no slouch on guitar either, ripping exquisite solos from her fretboard here, soaring majestically over the  maelstrom created beneath her by Joey DeMartini (bass) and Jay Erbe (drums).
"On Strength Of Steel" continues the blood and battle theme and has a slightly Grand Magus groove that sees DeMartini and Erbe laying down some solid metal rhythm work over which Strangenberg lays an infectious riff and vocal.
Title track "Strange Creations" is up next and begins with Strangenberg doing her best Dave Gilmour impression with a beautiful and tasteful solo in the intro before going into the main riff. Slightly more commercial in sound than the rest of the album "Strange Creations", in the old days, would of had managers, record execs screaming "That's the single!"
"Green Queen" finds Disenchanter in stoner territory, the band grooving on a delightful fuzz soaked riff with Stangenberg lifting her voice into the upper register of her range. De Martini and Erbe are tight and solid throughout delivering a thunderous display of four string and percussive power to  proceedings that is matched superbly with Strangenberg's choice of guitar licks, notes and solo's.
"Sorceries" heads into more doomier waters beginning slow and funereal, the track slowly building layer by layer until exploding into a mind blowing fusion of bluesy doom and heavy psych with Strangenberg's guitar and vocal wailing against a wall of dark distorted noise. Dark doomy and emotive it stands head and shoulders above the rest of the tracks on "Strange Creations" and for me is the highlight of the album.
Staying in the bluesy doom arena "A Thousand Times" adds atmospherics to Disenchanter's already impressive cannon .It is a dark foreboding lullaby and with lyrics like "Salt the bones and build the pyre, Bring forth cold and lightless fire" you can be pretty sure this not a song about bunny rabbits and flowers...unless of course your burying your bunny rabbit.
"Snakes Of The Earth" closes the album in grand style with an intriguing mix of doom and psych overlaid with a mantra-ish slightly monotone vocal and infused with touches of middle eastern promise, a sort of "Kashmir" for the stoners.
Disenchanter have created an album that crosses back and forth between the various sub-genres of rock with ease, part stoner, part heavy metal, part classic rock and knocking on the doors of doom and psych "Strange Creations" is diverse and magnificent! 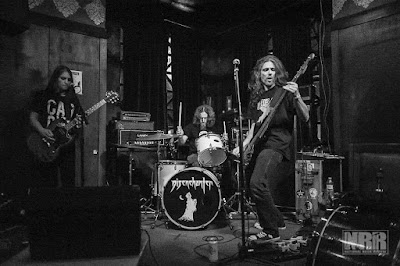 Posted by Desert Psychlist at 08:03