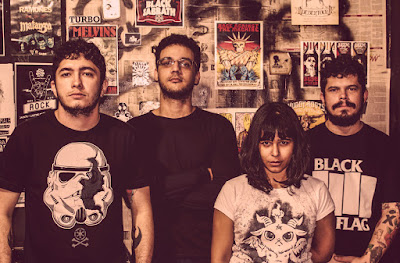 Maybe I should change the name of this blog from Desert Psychlist to Rainforest Psychlist as it seems that everything I listen to lately comes from Brazil!
Black Witch are a four piece band from, Brazil's second most populated city, Mossoró and their debut EP "Aware" has just been made available for download at Bandcamp. 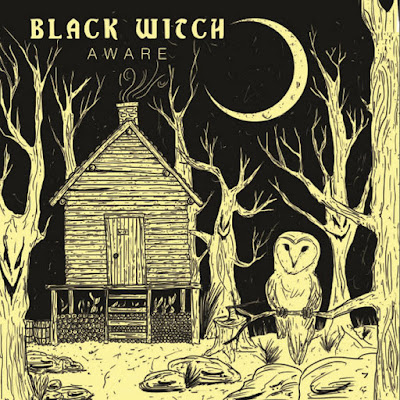 "Aware" starts, all guns blazing, with opener "First Ritual" a fuzz drenched monster of a track, its chainsaw riffs and solid rhythms, courtesy of Rafaum Costa (guitar), Fred Nunes (drums) and Jorge Luiz (bass), lay a glorious stoner/occult foundation over which Lorena Rocha adds her vocal colouring. Rocha's tone and delivery is where things may get a little sticky for some listeners, slightly monotone and straying off key on occasions her voice may be an acquired taste for some. Personally I find her untamed voice a refreshing change to the more cultured vocals of other female singers  currently plying their trade in this field especially when it is set against the backdrop of down tuned riffage laid down from Costa's guitar. Costa's guitar tone perfectly compliments Rocha's vocals by employing a tone similar to that which Alice In Chains guitarist Jerry Cantrell used on "Check My Brain"  dissonant, atonal but totally effective, his solos and licks possessing a delicious dark slur.
A fine example of this can be found on second track "Necromancer" its straight stoner rhythms broken up by a repeating "slurred"  guitar motif  that just slays, Rocha lays down a wonderful vocal here but it is when it comes to the guitar solo that things get really interesting. Using the magic of overdubbing Costa goes toe to toe with himself, his slurred guitar tone facing off with with a more traditional tone in the other channel, its a wonderful moment in what for me is the strongest track on "Aware"
"Eyes Inside", "Salem" and "Samsara" continue in much the same vein with "Salem" being the pick of the bunch, Rocha's vocal oozing banshee like over a solid rhythmic stoner pulse, laid down by Nunes and Luiz, and further enhanced by Costa's caustic guitar riffs.
Black Witch's slightly off-kilter take on the stoner/occult sound  may not be everyone's cup of tea but for those out there who like a bit of dissonance in their sonic grooves "Aware" is one to check out.

Posted by Desert Psychlist at 14:28