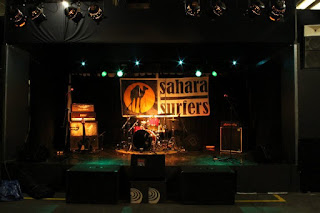 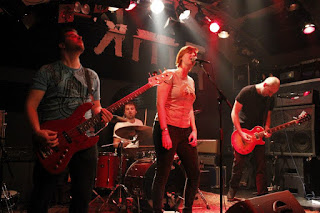 Austria may be known for their delicious desserts but the country is not really known for its deserts. This little fact has not, however, stopped Austria's Sahara Surfers from releasing a series of albums containing some of the best desert grooves not to come out of a desert! If you need proof of this check out the bands latest album "High Lands". 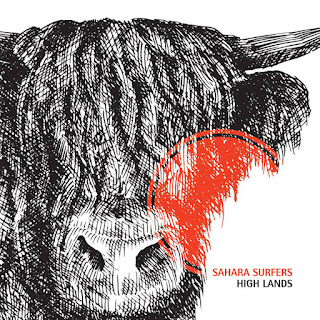 Sahara Surfers will not be unknown to a lot of the seasoned stoners who frequent the scenes numerous blogs, forums etc. as their two previous releases "Spaceship On a Paper Plane" (2010) and "Sonar Pilot"(2011) were both received with warm reviews from both stoner rock fans and the underground music press. "High Lands" continues where those two albums left off by mixing elements of alt.rock, metal and psych and nailing them to deliciously sandy desert grooves that are then embellished with smooth, super cool female vocals.
"Traces" gets the ball rolling with a Colour Haze type vibe, Hans-Peter Ganner's bass and Michael Steingress' drums creating a warm groovy bedrock for Andreas Knapp to add little touches of six-sting colour and texture one minute and full on stoner fuzz the next. Over this mixture of krautrock vibes and stoner psych funkiness Julia Überbacher delivers a vocal that is clean, rich and has a warm melodic power, her voice wrapping around you rather than bludgeoning you to death.
Second track "Feels Like Riding" starts off a little funky before kicking into a dirty Kyuss-like riff  over which Überbacher sings "What did he say? Did the ground stand up, You gotta starve your pain, I hear you" a line that written down does not mean much but I guarantee you, that line will be going round and round in your head all day.
"Grey Spring" sees Sahara Surfers mix it up with deeply distorted riffs and rhythms set against a highly infectious verse/chorus/verse. The band even inject a little stoner doom to proceedings when at the 02:03 mark Knapp, Ganner and Steingress hit on a chugging metal groove before going back into the songs main riff, its only a moment but it's a stroke of genius.
"Charma"is up next, the songs shifting dynamics lending themselves to a more progressive/psych rock feel than previous tracks and sees Ganner and Steingress stepping up to the plate with some excellent rhythm work. "Charma" also showcases Knapp's guitar chops, his tastefully picked arpeggios sitting next to throat ripping riffage and burning solos, filling in the gaps between Überbacher's sublime vocals with stunning fretwork.
"Ghost" is a monster track that once again sees the band stepping out of their desert rock comfort zone into more prog/psych areas. Kicking off with an exquisite bass and drum intro the track slowly builds before collapsing down again when the the verse is introduced.only to build again for the chorus. As in "Traces" there are elements of Colour Haze's krautrock psych but this time married to the bombastic stoner  groove of Rhode Island's Elder, at 10:31 it's the album longest track and its best.
Final track "The Thief" drops things down a little, gentle and mellow, Überbacher's vocal is backed by gently picked acoustic guitars and occasional vocal harmonies It is in complete contrast to the fuzz and psych of the rest of "High Lands" but sits nicely on the end as a reminder that there is more to this band than first meets the eye, or ear in this case.
Posted by Desert Psychlist at 11:17