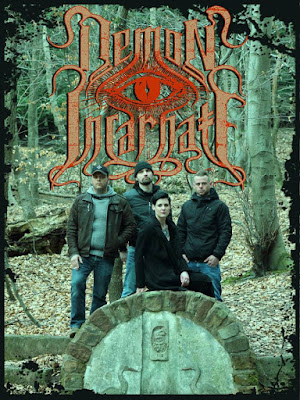 The occult/doom scene boasts a whole host of bands fronted by female vocalists so it came as no surprise when another one popped up out of the blue via my Bandcamp feed. What did come as surprise though was how ass kickingly good this band were and how deliciously dark was the voice of their vocalist. 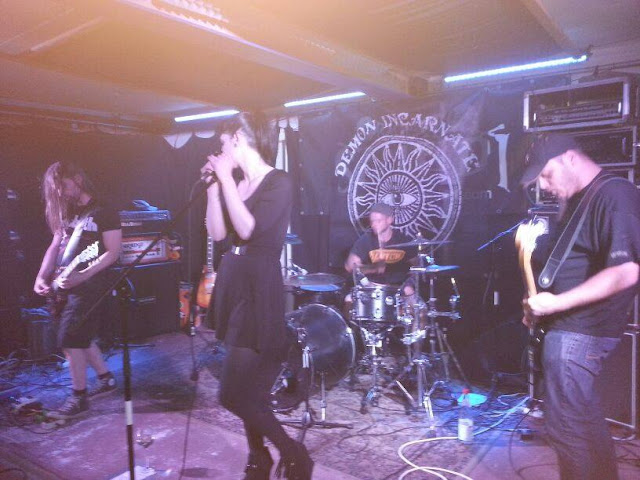 Demon Incarnate are a German based band made up of a mix of German, French and American members and have been around since 2010 in one form or another. The current line up of Lisa Healy (vocals, Jan Paul (guitar), Phil Gandner (bass) and Tobias Schmidt (drums) have just released their self-titled debut album "Demon Incarnate" on FDA Rekotz. 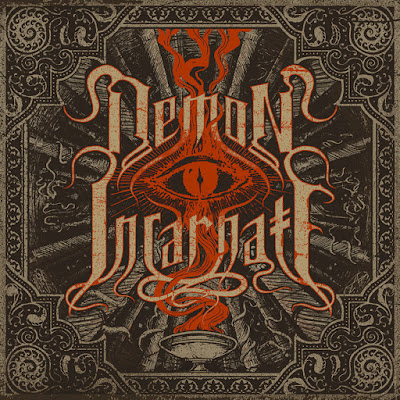 "Grinder" opens the album, rushing out of the speakers, a whirlwind of metallic riffery, doomy rhythms and deliciously dark vocals. Paul, Gandner and Schmidt lay down a furious barrage of metal and doom grooves building a huge sonic platform for Healy to add her considerable vocal skills to. It's a superb opener and a good indicator for what to expect from the rest of the album.
Healy's voice dominates "Demon Incarnate" (the album) and it does seem that the band, not surprisingly, have built their sound around it. Sitting at the lower end of the vocal spectrum, Healy's voice possesses a wonderfully smooth tone that she uses to great effect throughout the albums seven tracks. On songs like "Embers Glow" and " Lifeless Eyes" she brings a certain gravitas to the table, a gravitas that might well have been lost if sang by someone of the more pyrotechnic persuasion, her low tuneful tones adding a certain mournful despair to proceedings.  Lets not forget though that there are three others in this band and the contributions they make are essential to the bands overall sound. Jan Paul is my kind of guitarist, never overplaying his hand, picking his moments to lay down a scintillating solo one moment then stepping back in the shadows to groove on a riff the next, always playing for the song.
Gandner and Schmidt meanwhile are so locked together they are almost one, tight and solid they create a tornado of sound for Paul and Healy to work over, pushing the sound in a flurry of sticks and thick strings.
Darkly delicious and with a harder, more metallic edge than a lot of their peers, Demonic Incarnate's sound leans more towards the dark themes of The Devil's Blood than the occult-lite commerciality of Jex Thoth. If the occult genre is something that rocks your musical boat and you like your female vocals smooth, dark and slightly gothic then Demon Incarnate are the band for you.

Posted by Desert Psychlist at 11:45