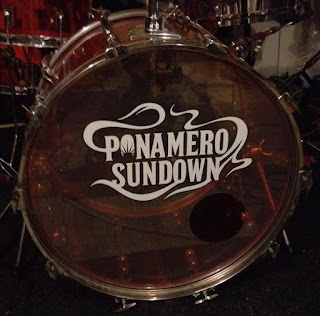 A while ago I contributed a band bio to the band threads of the now (sadly) defunct Hard Rock Revolution Forum concerning Sweden's Ponamero Sundown, on that bio I made a mistake that was picked up on by the bands guitarist Anders  who was perusing the site a couple of days later. Anders, to his, credit then stuck around answering questions from the forum members and over the next year or so kept us up with progress reports on the bands developments and even going as far as giving us access to song demos and jam tracks. So it gives me great pleasure to today review the bands, long awaited, new album "Veddesta" 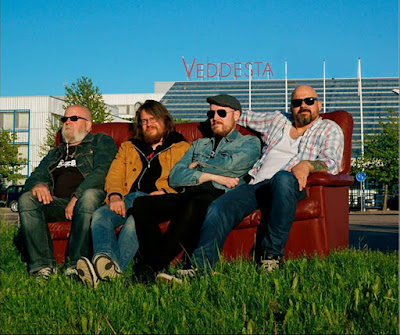 "Bottom Of The River" kicks things off nicely, a single percussive beat leading to a grinding guitar motif that is punctuated with short sharp chordal stabs before settling into the main riff. Robert Triches (bass) and Peter Eklund (drums), Ponamero's engine room, drive the song along at breakneck pace with Anders Martinsgârd's guitar laying down deliciously dark riffs and solos over the top. Vocals are provided by Nicke Engwell, strong, powerful and having just the right balance of classic rock clean and stoner rock grit he delivers lines like "At the bottom of the river,Too dark to see - too numb to feel" with real conviction and powerful emotion.
"Hangman's Trail" is next to assail your senses, a heavy mid-.paced rocker that leans more to hard rock than stoner. The song, a tale of wanted men and prison cells is another fine showcase for the rhythmic skills of Eklund and Triches, the former thrashing his kit to smithereens and the latter's four strings booming with deep fluidity. To this Martinsgârd adds, along with his customary fuzz drenched riffage, a wonderful eastern tinged guitar motif that is also incorporated into his solo. Over all this mayhem Engwell roars and croons, telling the story as if he's living it!
"Restart My Heart" stays in the 70's hard rock arena, it's infectious chorus pulling you in until before you know it your singing along. Catchy and with enough hooks to hang a sky on this would of made a great single back in the days of flared trousers and denim jackets, when singles mattered.
"The Fortune Teller" opens with a rolling guitar riff that then drops away for Engwell to deliver the verse then picks up again for the chorus, the song reaches its conclusion with Martinsgârd tearing a burning solo from his fretboard, bluesy notes dripping from his strings.
"Rhinostodon" sees things getting a little psychedelic with Martinsgârd coaxing sitar like effects from his guitar and Engwell's vocals delivered slightly synthesised and distant. The song shifts through a series of dynamics getting a little doomy in places and a little progressive in others but never getting disjointed or losing its way. It's a slight departure from Ponamero Sundown's usual hard/stoner groove but one I would like to hear more of.
It's back to business as usual with next track "Broken Trust" an all out more rockier track that sees the band leaning back on the more stoner aspects of their sound  Engwell delivers the songs lyrics with a throaty roar over a backdrop of booming bass lines, crashing drums and dark chainsaw riffage that is occasionaly broken up by ambient psychedelics only to go full tilt rock monster moments later.
Final track "Dead And Gone" closes the album with the four band members firing on all cylinders, part bluesy torch song, part rock monster the song shows a maturity of songwriting, arrangement and musical skill that although was not lacking on past releases, has on "Veddesta" reached a peak!

Posted by Desert Psychlist at 08:54